Delhi-based Cube26 is one of the few (but increasing) number of Indian companies trying to establish themselves by designing and developing hardware in the country. Earlier this year, we reviewed the iota Lite, Cube26’s first smart bulb, and were largely impressed by the offering.

Cube26 has now unveiled its 'Reos’ sub-brand with the launch of Reos Message, Reos Music, and Reos Camera apps for Android, as well the Reos Lite, an upgraded version of the iota Lite. Just the iota Lite, the Reos Lite is a smart LED bulb, which fits into any E27 slot in your house. What this means is that the Reos Lite is the kind of bulb that screws into its slot, though included in the package is converter for fitting it into a ‘normal’ (B22) socket.

The Reos Lite works like any other LED bulb, but the free Reos Lite app for iOS anAndroid gives you access to its smart features. The app is an updated, rebranded version of the iota Lite app that sports a much-improved interface. Launch the app and your Reos Lite LED Smart Bulb should show up in the list of available devices, connecting to your phone over Bluetooth, which must be turned on your phone. Select the bulb and tap on Proceed to be taken to the main screen of the app, where all the action happens.

(Also see: Everything You Need to Know Before Buying LED Lights)

The main screen shows a colour picker where you can tap to change the colour of the light. You can also take pictures and then use the colours in the photo to pick a colour for light - this could be handy if you are trying to match the colour of the light with the rest of the room, for example. A slider at the bottom lets you adjust the brightness of the light. The Reos Lite is capable of hitting 1100 Lumens, a massive increase compared to the 500 Lumens on the iota lite. You can of course toggle the bulb on and off from within the app as well, and interestingly, even if you switch the bulb off from the mains, it remembers the last colour of the light when it powers back on. However, if you power off the bulb right after changing the colour, sometimes it will power on in the last but one colour, ostensibly because it didn't have the time to save the previous state.

If the mains are powered off, then the app will lose its connection with the bulb, and anything will you do will obviously have no impact. The bulb powers back on as soon as you switch the mains on, even if you'd shut it down from the app previously. This is a nice touch, because it maintains the behaviour of a 'regular' light, where you expect it to power on as soon as the switch is flipped. However, in our experience, toggling the main switch can mess with the state of the app and though the Bluetooth pairing is restored as soon as the bulb is powered back on, you may have to restart the app to control the light. 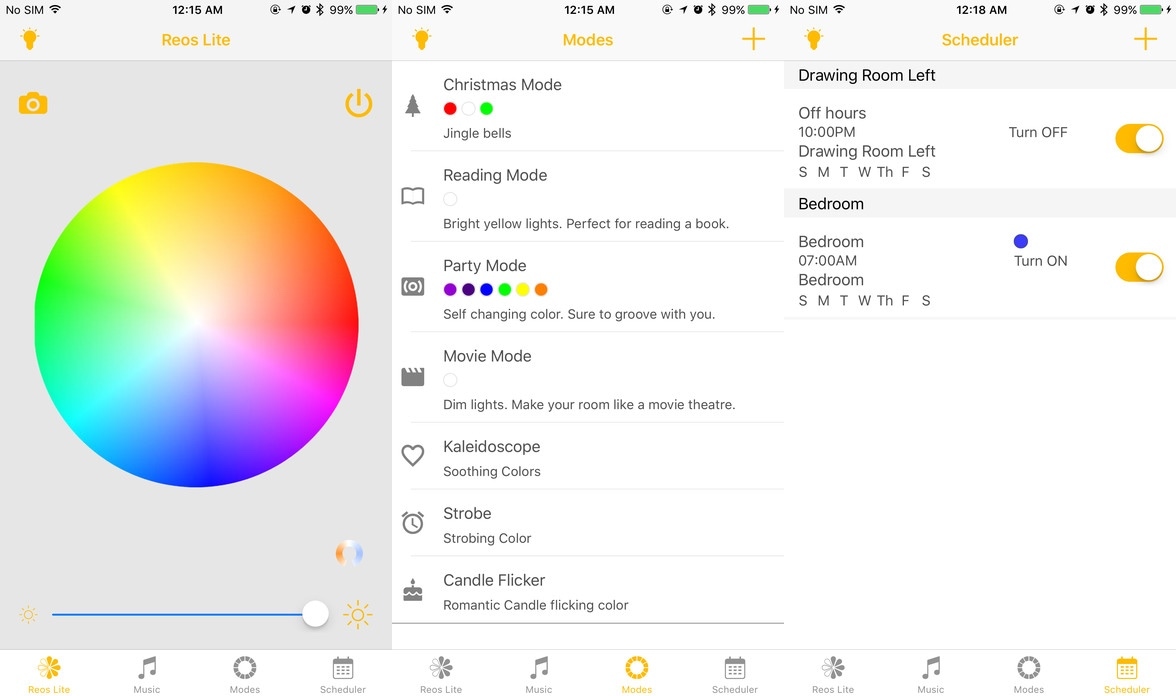 The Modes tab of the app lets you choose from one of the many preset modes. For example, you can have the light switch between red, white, and green colours (Christmas mode); a simple Reading mode with bright, yellow light; and a mode that mimics the flicker of a candle; among others. You can even build your own mode, defining the transitions between various colours, and the duration as well as brightness of each effect.

The final tab lets set timers or schedule for your light. For example, you could set a timer to switch the light off (or on) after 30 minutes; or you can have a more detailed scheduled, where you, say, have the light automatically switched on or turned off at a certain time of day. A schedule lets you pick frequency as daily, or week day, or any day(s) of the week. Both schedules and timers are followed even if your phone is switched off, or out of the Bluetooth range of the light - which sounds useful if you want to set up your lights to look like you're at home even when you're travelling. The Reos Lite LED Smart Bulb can also be setup to double up as a notification LED for your phone, flickering when you get a SMS, for example. 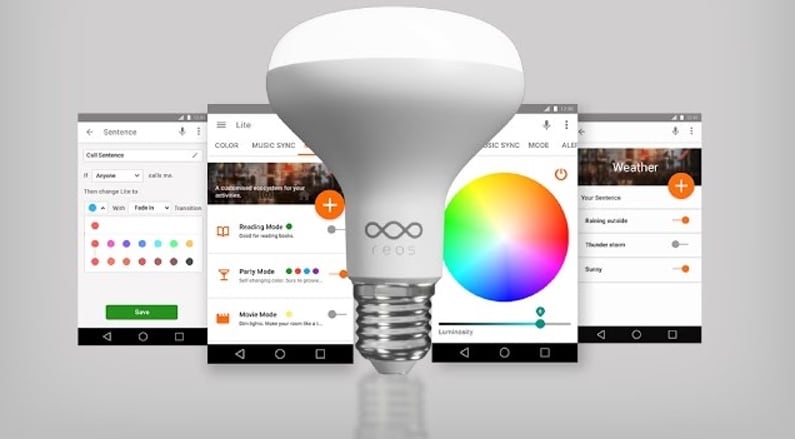 Though you can control more than one Reos Lite LED Smart Bulb from your app (and have them all controlled via a schedule, switching lights on and off automatically when you want), each bulb only connects to one device at a time. Since the bulbs connect over Bluetooth, the range is also pretty limited. The Reos Lite LED Smart Bulb officially has a range of up to 15 metres, but like all things Bluetooth, it works best within the same room and when you have a clear line of sight between the phone and the bulb. This is our main complaint about the Reos Lite LED Smart Bulb since we really missed the ability to control the light from another room, and adding support for Wi-Fi would make the bulbs much more useful, and potentially allow them to be controlled over the Internet as well.

The app has another problem where it doesn’t detect that the connection with the bulb has been lost and lets you modify the bulb’s state. For example, you can modify the colour of the light in the app even when there’s no active connection, and but the next time the connection is restored, nothing happens as the app syncs with the ‘real’ state of the light. The app needs to be smarter about detecting connection drops and should stop you from wasting time making any changes when the bulb is not connected.

The Reos Lite LED Smart Bulb is available via Flipkart at around Rs. 1,300 and it ships with a B22 adapter, which means it will work with just about any light in your house. At the price, it’s a pretty accessible option for anyone looking to add a ‘smart’ light to their house at nearly one-tenth of the price of more expensive options like Philips Hue - our only real complaint is the limited range that comes with Bluetooth connectivity.