Honeywell is a technology company with products ranging from Wi-Fi in the sky to pollution masks for industrial use but until recently, its Indian customers have typically been businesses and institutions. With the air quality in India steadily worsening, the company is making its play into the consumer goods space here, launching its first range of consumer air purifiers. That's all fine, but does the actual product measure up to consumer needs, and is it a value for money offering? Honeywell provided us with a unit of its Honeywell Air Touch i8 42-watt air purifier to try out, which we did for almost a month. In this time, we measured its effectiveness using the same third-party laser particulate counter that we used for testing all other air purifiers, and also used it as our primary air purifier in the bedroom to see how comfortable it felt to use.

We looked at things like availability of filters, how easy it is to replace them, and how easy it is to move the purifier around the house so the benefits aren't just limited to a single room. Let's see how it measured up.

Honeywell's design looks dated and boring, and the champagne gold colour choice looks fine on some smartphones, but on a device the size of an air purifier, it just leaps out at you in a less than ideal manner. For what it's worth, the purifier is available in white as well, which does look better, but still rather boring. 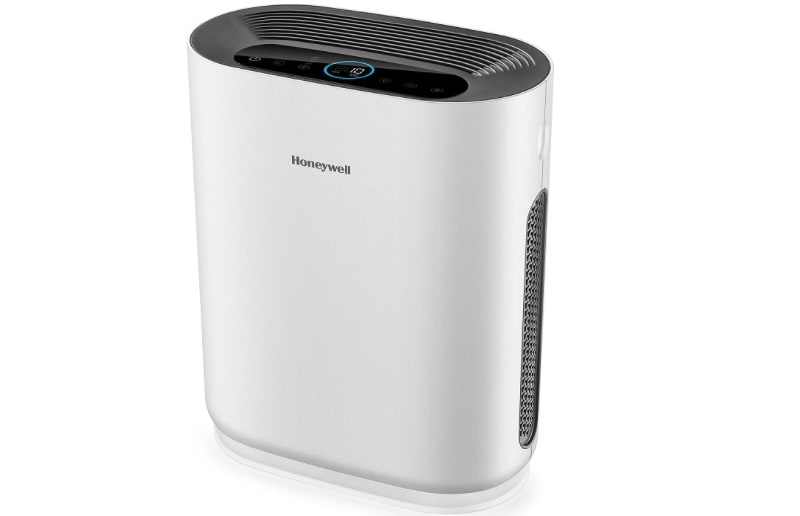 The design is basically a tall box with fully-rounded sides, with intakes at the bottom and along the narrow sides, while the exhaust is along the top. On the sides, above the intakes there's a small groove which can be pushed apart with a little firmness, to remove the front cover of the purifier. This reveals the washable Honeywell pre-filter, behind which there's a compound HEPA filter that removes particulate matter, along with Honeywell's Hi-Siv filter which can remove odours and VOCs from the air.

There's a simple touch panel on the top of the purifier and if you're using it on auto mode, you literally need to touch just the power button, and that's it. There's a sleep button next to it, which lowers fan speed and turns the lights off, and then a fan speed button. The unit is best left to auto, but if you want to control the performance, you can tap the button to change the speed.

After this, there's a display showing the air quality and other alerts. The lock, sleep mode, and filter lights all go on to let you know what the setting is, and a simple numerical display shows you the AQI reading. Even simpler though, is the coloured ring that surrounds this - blue is clean air, red is bad air, and so on. It's easy enough that without reading the numbers you can tell the air quality at a glance.

The final indicators are the lock and filter - lock prevents accidental touches from changing the settings while the filter light is a filter change indicator. 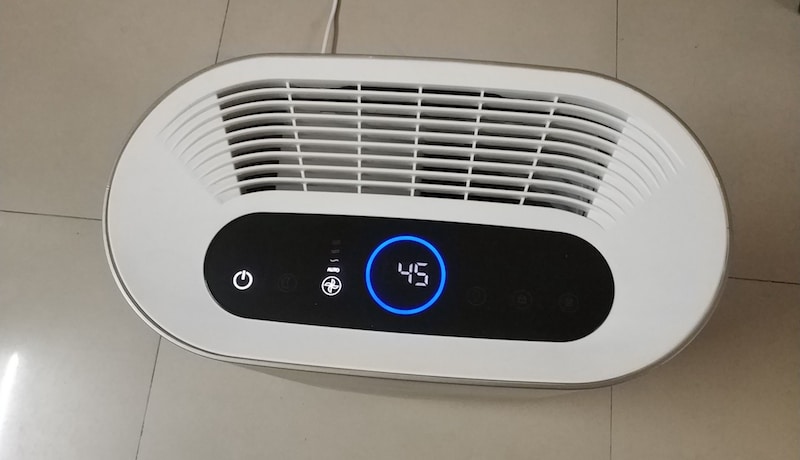 Apart from the filters mentioned above, the Air Touch i8 promises a CADR of 300 cubic meters per hour. The company promises that a 300 square foot room will be clean in 15 minutes, and that the purifier has an effective coverage of 450 square feet.

Otherwise, the Air Touch i8 is a very simple device that really comes down to one-touch operation. Leave it in auto mode, and let it do its thing, using only the power button to turn it on or off.

The purifier can get fairly loud, and sleep mode does help on that front, but if you're living in a city like Delhi, you need the fan operating at full speed. There's a button to turn the lights off separately, but there's no middle ground - it goes from too bright to fully dark.

There's no app, and no gimmicks - the Air Touch i8 is a focused and single purpose device which does just one thing. The question is how well it manages. 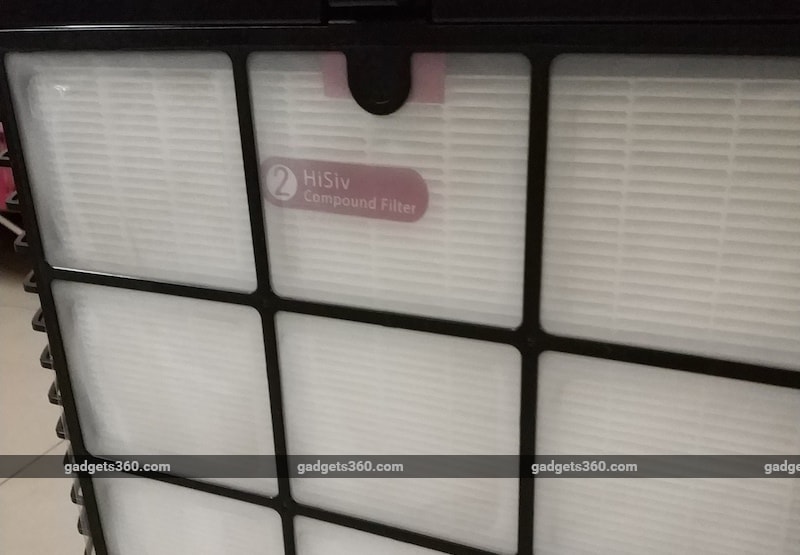 We started by testing the air purifier in a 10 foot X 20 foot bedroom, well within the effective range as listed by Honeywell. In this small space, even our (relatively small) Xiaomi Mi Air Purifier 2 is quite effective, and the Honeywell unit lived up to its claims quite effectively. For the testing, we operated the air purifier after smoking in the room, and while it couldn't completely remove the odours, it brought the air quality from over 200 to under 50 in roughly 10 minutes.

Taking the air purifier to a room that overlooks Bengaluru's Outer Ring Road, we were able to more closely simulate the continuous pollution that is so common in North India right now. Once there, the purifier was dealing with a PM 2.5 count of 400 coming in from the outside, making its way even into an enclosed room.

In auto mode, the purifier immediately revved up, in a hall that's around 20 feet X 20 feet. The noise got fairly loud at this point, but the purifier was also very effective at bringing the levels down quickly. The readings on our air quality monitor showed the PM 2.5 count dropping, and within two hours of use, the room's air quality was at acceptable levels, which is pretty good. We've seen similar performance from more expensive purifiers, but at this price, only the BlueAir Blue Pure 211 does better. 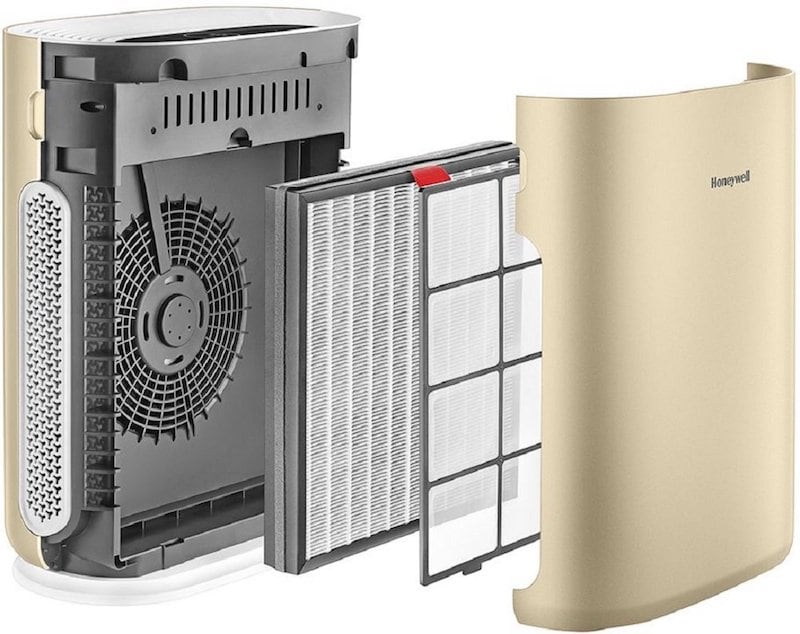 It's main competition is the BlueAir Blue Pure 211, as they're priced similarly, but the Honeywell is slightly cheaper, and its filters are easily available online, which is a big plus in our book.

Price: Rs. 22,900 (MRP), available at Rs. 19,130. New filters will need to be bought anywhere between once a year and once in three-four months depending on operating conditions, and are available online for Rs. 4,290 for the compound HEPA + HiSiv filter, and Rs. 1,090 for the pre-filter.

Further reading: Honeywell, air purifiers, Honeywell Air purifiers, Honeywell Air Touch i8
Gopal Sathe Email Gopal
Gopal Sathe is the Editor of Gadgets 360. He has covered technology for 15 years. He has written about data use and privacy, and its use in politics. He has also written extensively about the latest devices, video games, and startups in India. Write to gopal@ndtv.com or get in touch on Twitter through his handle @gopalsathe with tips. More
Apple Served With Search Warrant for Access to Texas Shooter's iPhone: Report
Apple Pay Makes First Deal With Major French Bank, Societe Generale

product Honeywell is trying to expand its presence in the consumer space with its new air purifiers. We tried out the Honeywell Air Touch i8 to see how it measures up. 4 out of 5 stars