Samsung's Galaxy Gear, a new computing device worn like a wristwatch, is certain to pique much curiosity when it starts being worn in public. The intensely black rectangular screen and orange strap on the wrist of a Samsung executive immediately caught my eye as she entered a corporate meeting room to give a preview of the gadget.

Samsung will start shipping the $299 Gear smartwatch in September, ahead of a similar product expected from Apple. I had a chance to play with a pre-production unit for about 10 minutes and briefly with the version that Samsung announced Wednesday in Berlin on the eve of the annual IFA consumer electronics show.

Like similar products already being sold, the Gear is not an independent device. For useful functionality, the Gear needs to be linked with a specific Samsung smartphone or tablet computer. The pairing is done wirelessly over a Bluetooth connection built in to both sides.

The Gear's display is a touch screen measuring 1.63 inches diagonally. Its strap has an embedded camera. The Gear supports apps such as Facebook and lets the wearer answer incoming calls or check email without picking up the smartphone that's paired with it. The Gear is not the smartwatch with a flexible display, as disclosed in recent Samsung patent filings. 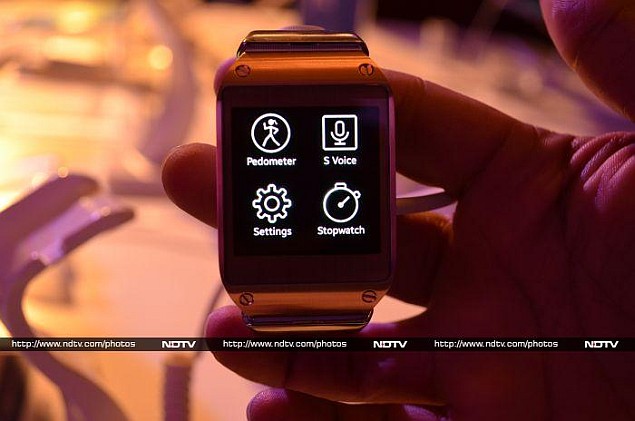 With smartphones and tablets now ubiquitous, the technology industry is trying to create a new category of products to wow consumers. Many analysts believe the next big step for consumer electronics is advanced computing technology in everyday objects such as wristwatches and glasses.

Sony introduced its latest SmartWatch in June and unveiled an update Wednesday. Qualcomm announced a smartwatch on Wednesday as well. Google is working on Google Glass - a device designed to work like a smartphone and be worn like a pair of glasses. Apple is seeking an iWatch trademark and is widely believed to be developing a watch that uses the same iOS software as its iPhone and iPad devices.

Meanwhile, the response to projects such as Pebble, a smartwatch that received more than $10 million in investment pledges through funding website Kickstarter, also attests to the public interest in this trend. 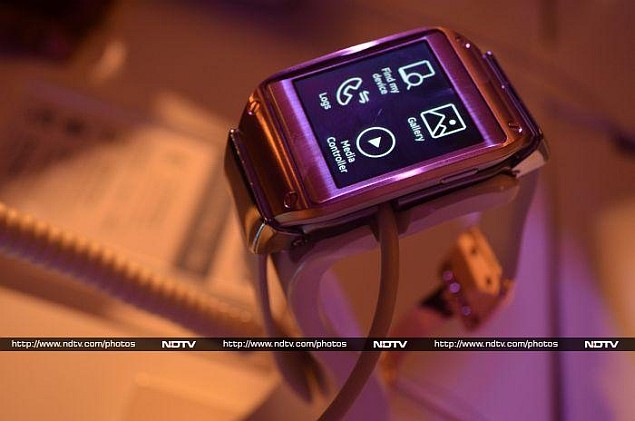 It didn't take me long to see what Samsung is trying to achieve. It wants to attract not only tech addicts who must have the latest gadget but also young, design-conscious consumers. The Gear's design flair and ease of use are its sweetest attributes, but it may not entirely please either group. Although powered by the Android operating system, like many phones and tablets, it will work only with Samsung devices - and only with newer models.

At about twice the price of the Sony SmartWatch and the Pebble, the Gear boasts a camera, a speakerphone and plenty of apps - about six dozen, according to Samsung. Apps include Twitter and sports services such as RunKeeper, which tracks runs and other workouts. These are all great features, but the 1.9 megapixel camera is of poorer quality than a typical smartphone camera. In addition, moderate use of the device will require a daily battery top-up with yet another charger to keep track of.

I can imagine wearing the Gear with a casual dress or a formal outfit. It is sleek, with a thin metallic bezel surrounding the display. The strap comes in six different colors - black, gray, orange, beige, gold and green. But the screen, which is pitch black in idle mode, probably draws more attention than a tasteful accessory should. The dark recess in the strap where the camera's lens is embedded will also elicit questions from the curious.

In terms of what the Gear can do, the three features I tested worked efficiently. It was easy to activate the camera and quick to shoot a photo. It left both hands free while placing and answering calls. The Gear alerted me with a nice soft buzz and showed a preview of a newly arrived email. The full message can also be read. Samsung says replies are possible through voice dictation. 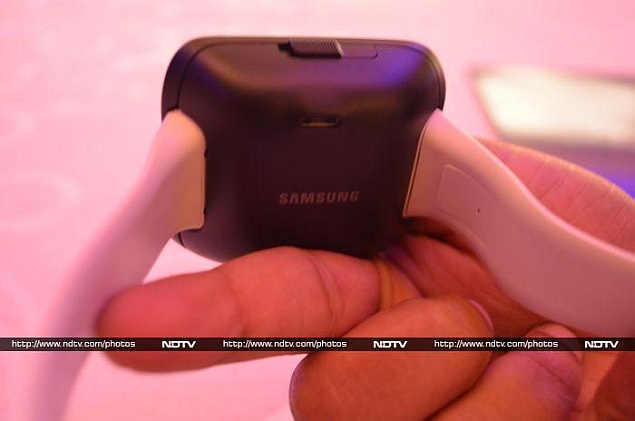 Taking photos felt natural except at very high or low angles, which forced the wrist into an awkward position.

I found easy navigation of the touch screen one of the device's biggest pluses. Samsung has dispensed with buttons on the screen, so there's no home or back button. There is a button on the top right edge of the smartwatch face. Pressing it turns the display into a clock. One tap anywhere on the screen takes and saves a photo in the Gear and the smartphone that's paired with it. In clock mode, one swipe from bottom to top pulls up a numeric keypad.

Swiping from left or right shows a list of icons, including the S Voice, Samsung's equivalent of Apple's Siri digital assistant that responds to voice commands. You also get a list of emails and notifications from social networking apps. At any time, tapping the screen twice with two fingers conjures a pop-up window that shows the time, the weather and the amount of battery left.

With the combination of S Voice and the speakerphone in the strap, placing and answering calls was much easier than a smartphone. I tested it in a noisy setting and had to speak to the Gear more than once to set an alarm in my smartphone or to look up a contact to place a call. But it did work without too much effort. I didn't have the device for long enough to test how well it worked when not very close to the smartphone. 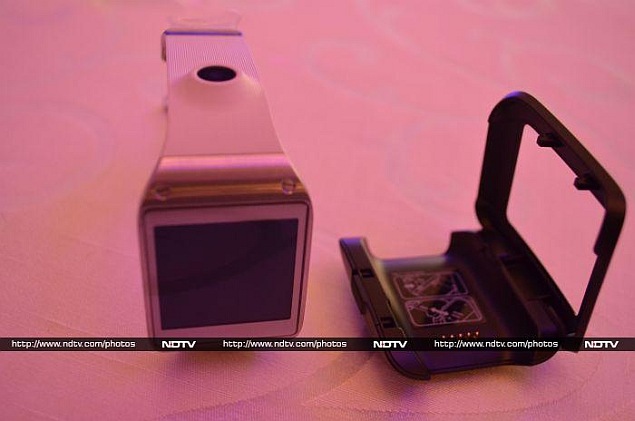 One downside is that the Gear doesn't support a wireless earpiece, so both sides of any conversation can be overheard. (There is a way you can get around that, though: Link the wireless earpiece directly with the phone instead. But the Gear itself can be linked only with one device - the phone.)

The big disappointment for Samsung gadget owners is that the Gear does not work with most of its phones and tablets. The Gear needs the Galaxy Note 3, a smartphone with a giant 5.7-inch screen and a digital pen, and the Galaxy Tab 10.1, a tablet computer. Both will go on sale later this month. At a later date, it will be compatible with the Galaxy S4, released earlier this year, and the Galaxy Note II, which came out late last year.

In some countries, mobile carriers will bundle the Gear with the Note III on a two-year contract. In other places, consumers will be able to buy the Gear without a phone contract.

Overall, the Gear gives us more ways to imagine what wearable computing gadgets might do for us in the future. The Gear is smart but in a limited way, as it's essentially a slave to the smartphone it's paired to.

After my brief hands-on experience, I decided the first generation of the Gear was cool but not compelling enough to convince me to ditch my current device, an iPhone. 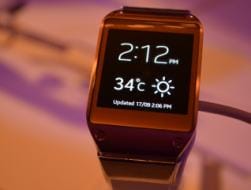