Dyson officially entered India about a month ago, bringing its vacuum cleaners, hair dryer, and air purifiers. We had a very brief chance to try these products when the company held a demo day in Delhi in November last year, and we were particularly curious to see how the air purifiers would measure up in the real world.

This is a category that is extremely important in India today, and it's also one that's not easy to navigate. There's a lot of jargon to unpack, and there are a lot of variables, so it's not easy to find the best air purifier for your needs.

We've been using the Dyson Pure Cool Link for about two weeks now, and in that time it's proven to be quite effective, but does that justify its Rs. 39,900 price tag? Read on to find out.

Dyson's air purifiers look classy and expensive. The blue and grey model we tested is especially attention-grabbing. There are two variants - Desk and Tower. The Desk model has a smaller circular loop, while the Tower model has an elongated ellipse instead, and is meant to stand on the floor. There's a Rs. 5,000 price difference between them, but in terms of functionality, the two are pretty similar. 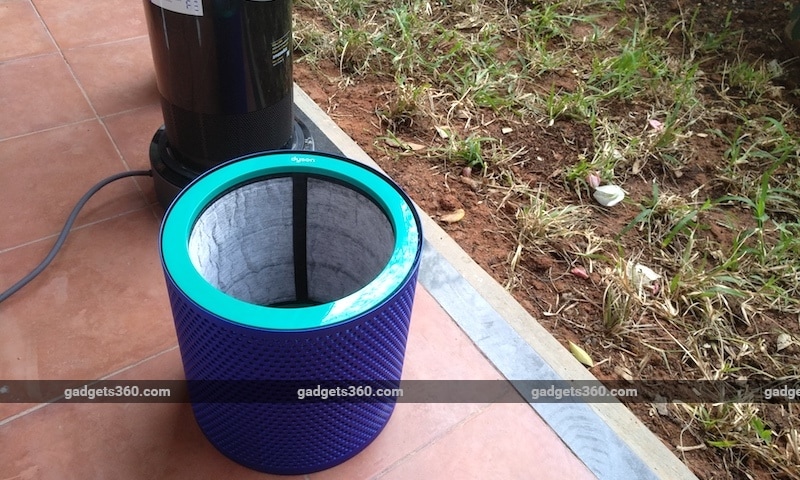 The filter is all one piece that's easy to replace when needed.

There's a cylindrical base with a mesh through which air is brought in, after which it's driven through the loop above, and pushed out after being purified. That design isn't just for style, though. Dyson uses what it calls air multiplier technology, and what this means is that the fan creates a low-pressure zone that pulls in air from behind it to create a much faster, directed "beam" of air. This makes the Dyson Pure Cool Link both an air purifier and also a fan, which is useful in temperate cities such as Bengaluru where we tested it. In a Delhi summer, you'd still need your air conditioner even if this is running.

Inside the cylindrical base, there's a 'Glass-HEPA' filter that removes particulate matter, as well as a carbon filter. Dyson says that its design reduces the velocity of oncoming particles, which makes the Pure Cool Link more effective. The filter itself is easy to remove and replace, although that's something you'll only have to do once or twice a year, depending on your usage.

The build quality of the air purifier is top notch, and it feels fairly tough. We also loved the design of the remote - it's very simple, and lets you control all the important functions. Such tiny remotes are usually easy to lose, so Dyson has given this one a magnetised top and a slight curve that lets it sit comfortably on top of the unit without falling off.

There's a small display on the base of the Pure Cool Link, which turns green when the air quality is good, and is white at other times. The display doesn't show much - only a Wi-Fi icon, so you can easily see if it's connected to your home network, and the fan speed. If you want additional information such as the AQI (Air Quality Index) reading, then you have to install Dyson's companion app. In use, the purifier is pretty much soundless until the '7' setting for fan speed, which also directly affects purification intensity; there's a faint hissing noise from the flowing air that you'll notice at higher speeds. 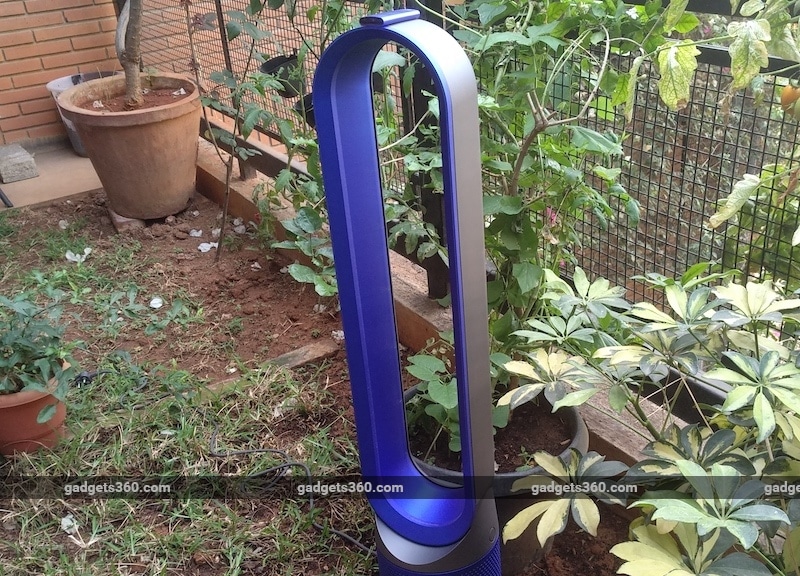 The elliptical loop is actually a fan that can blow a pretty powerful breeze at you.

In terms of features, the Dyson Pure Cool Link has pretty much what you'd expect from a high-end air purifier right now. The three parts of its name all refer to its capabilities, so let's look at them one by one.

'Pure' is of course for air purification, and as stated above, the device includes a 'Glass-HEPA' filter which is supposed to remove up to 99.95 percent suspended particles such as PM2.5 and PM10 particles - all the way down to PM 0.1 particles. Useful features include an Auto mode that adjusts the intensity of the purifier to the detected pollution level; a sleep timer; and a Night mode, which dims the display and lowers fan speed to reduce noise.

'Cool' refers to the fan - unlike other air purifiers that simply blow cleaned air straight up, this one throws it across the room, doubling up as a pedestal fan. It's decently powerful and is also quiet until about the '7' setting, as mentioned above, so it could be running in your living room without disturbing your conversations or TV viewing. You can adjust the speed and also make the loop oscillate.

'Link' comes from the fact that this is a smart connected device. Connecting to our home Wi-Fi was pretty simple. We first had to connect our smartphone to a hotspot created by the device itself, and then enter the details of our home connection for the purifier to establish its own connection. That's all pretty standard.

The Dyson Link app also has a remote function to let you send all the same commands that you can with the standard remote. Once your unit is linked to the app, you can also control it when you're away from home. All the AQI data that the air purifier picks up is viewable only on your phone. The app shows you the indoors and outdoors AQI, with the latter sourced from third parties. Although the app looks good, we found it a little clunky in use. Taps could take some time to register, and the connection wasn't always stable. Frankly, we were happier using the physical remote. 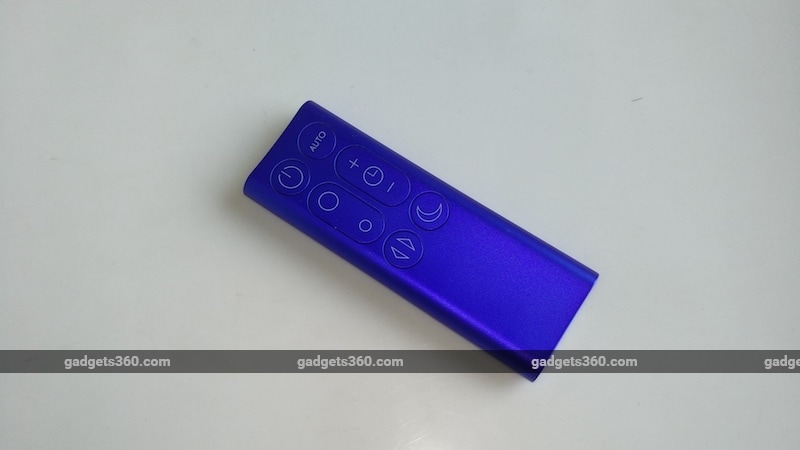 The tiny remote has all the functionality you require.

We were a little skeptical about the air purification performance of the Dyson Pure Cool Link - for one thing, its filter and motor are relatively tiny, compared to many other air purifiers we have used. Also, even at its loudest, it's much quieter than most of them, which makes it easy to believe that it might be ineffective. Dyson also doesn't offer detailed specifications about things such as CADR (Clean Air Delivery Rate), as there are too many variables.

Competitor analysis from BlueAir estimated a CADR of 75 cubic meters per hour, which is pretty low. In contrast, something like the Honeywell Air Touch i8 has a listed CADR of 300 cubic meters per hour. However, when we tested the Dyson Pure Cool Link for ourselves with an AQI monitor, it proved to be extremely effective. In normal conditions, it was able to bring the AQI reading down from 44 to 11 within 30-45 minutes, in a room measuring roughly 300 square feet. We then tested it by lighting incense cones and agarbattis in the room, and while it took about an hour to bring things back completely to normal, at least the fan dispersed the smoke quickly, and so there wasn't an area of concentrated pollution.

In short, this isn't the most effective air purifier we've used, but despite our concerns, the Dyson Pure Cool Link did get its job done.

Verdict
The Dyson Pure Cool Link Tower is the most eye-catching product we've seen in this category. We can see excellent attention to detail in terms of its build quality, as well as things like the design of the remote. Although Dyson's other products in India are quite expensive in their respective categories, the Pure Cool Link actually isn't too unreasonable - though it's still definitely priced like a premium product. Replacement filters are also relatively cheap.

As has been the case with other air purifiers we've used, the smart features of this product feel like extras that few people really need. The app does deliver AQI information which will be useful if you don't have a standalone device to check this data, but honestly, just switch it on and leave it in Auto mode, and you'll get the most out of it.

product Dyson Pure Cool Link is a great-looking air purifier, but how well does it work? Read our review of the Tower and Desk Dyson air purifiers to find out 4 out of 5 stars