Dyson Corrale Review: This Straightener Claims to Reduce Hair Damage by Half, but Is It Worth the Price?

The Dyson Corrale is a wireless straightener that has three heat settings to choose from.

We accept the hair damage we think we deserve. Flattening hair with an iron; forcing it to go against its very nature, isn't very healthy – we know this. Yet we continue to reason that it's a small price to pay for a good hair day. That's what makes the Dyson Corrale hair straightener unique – the company claims that this wireless straightener elevates styling results, while reducing heat damage to hair by half. Is it worth the high price of Rs. 36,900, though?

The Dyson Corrale hair straightener was released internationally in March, but was launched in India only in September. Dyson says that the Corrale features pioneering micro-hinged plate technology, which means the copper plates flex to shape and gather hair, evenly applying heat and tension to all strands in every pass. Keeping hair perfectly aligned is said to reduce the need for high temperatures. Dyson also claims that this is the only hair straightener to use flexing plates.

The Dyson Corrale straightener was in development for seven years. According to Dyson, a global hair study it conducted in 2017 showed that heat damage is a key issue for Indian women. The company believed that imprecise heat settings and difficulty in styling the back of the head with existing appliances were also prevalent problems, and says the Corrale was designed to combat them.

The Dyson Corrale hair straightener is priced at a whopping Rs. 36,900 in India. It is available in Black Nickel + Fuchsia and Purple + Black. It is up for sale on Amazon, Flipkart, Myntra, Sephora and Nykaa, as well as at select Croma stores and salon partners. Besides that, the hair straightener is also available across the six Dyson Demo stores in Delhi, Mumbai, Bengaluru and Chennai; and can be ordered through Dyson's website if you're in other locations. It comes with a two year warranty.

Dyson is currently offering a complimentary styling set that includes a Dyson-designed paddle brush and a detangling comb on purchase of the product on its website.

Using the Dyson Corrale and its features

The Dyson Corrale comes packed in a heat-resistant travel pouch wrapped with a golden ribbon – the company wants you to feel a touch of luxury before you've even seen the product. Along with the straightener itself, there is a charging dock and a magnetic 360-degree charging cable. Personally, I quite like the idea of a charging stand; it means not having to worry about accidentally putting a hot straightener somewhere it shouldn't be. 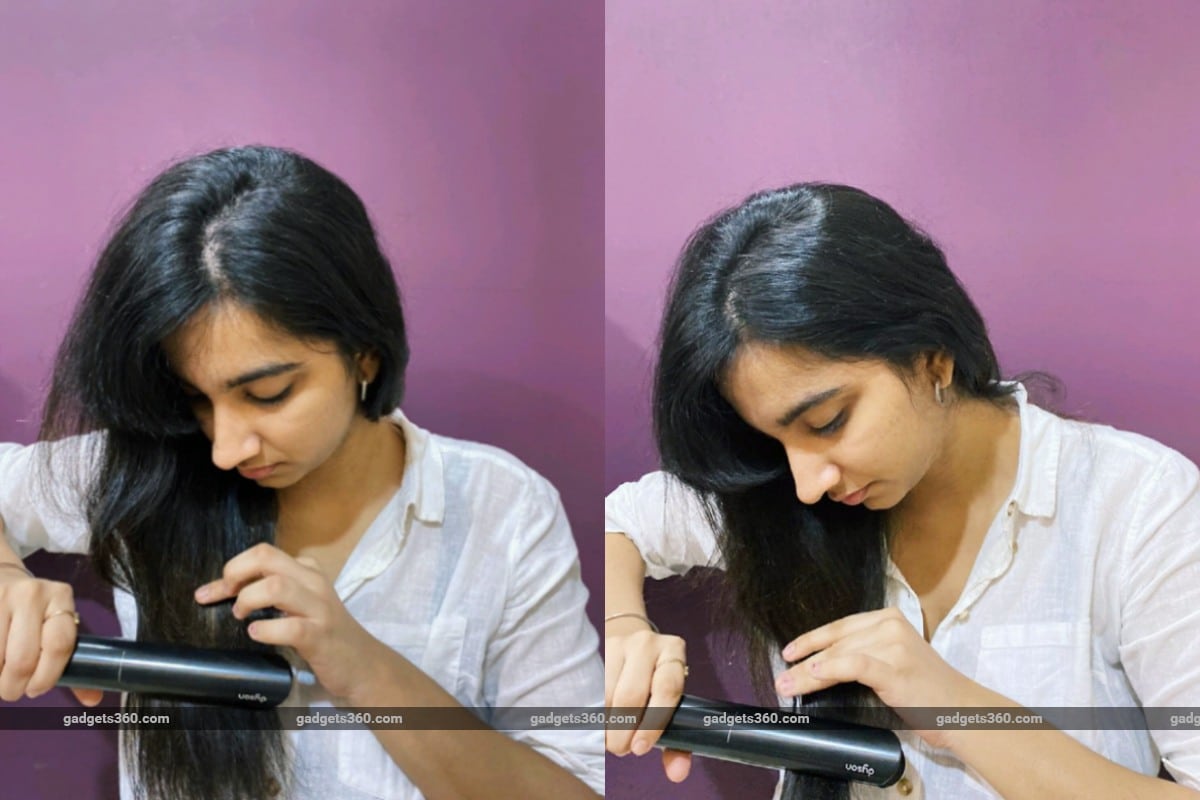 The straightener is powered by a four-cell lithium-ion battery, making it cord-free and portable. It felt rather heavy when I first picked it up; a feeling that was exacerbated after using it for fifteen minutes at a stretch. It weighs 561grams and measures 292mm x 41mm x 45mm.

The cordless Dyson Corrale made it relatively easy to straighten the hair at the back of my head. Although a lot of other straighteners have wires long enough for this to not be too difficult, the battery will definitely be a bonus for those wanting to use hair straighteners on the go. The Dyson Corrale fits inside its travel pouch easily, and isn't big enough to be a hassle to carry around.

The Dyson Corrale straightener has three heat settings – 165 degrees Celsius (330 degrees Fahrenheit), 185 degrees Celsius (365 degrees Fahrenheit), and 210 degrees Celsius (410 degrees Fahrenheit) – so you can choose whichever one suits your hair type and desired style. I ended up using the 210 degree Celsius setting almost all the time as I have thick hair, but the medium setting should work pretty well for most people. Your family and friends can easily adjust the heat setting to suit their own needs. Dyson says the straightener has an integrated sensor system that regulates the temperature of the plates 100 times per second, which helps ensure that the plates never exceed your chosen temperature. The Dyson Corrale takes a little over an hour to recharge fully, after which the battery lasts for around 30 minutes. It is possible to also use the straightener while it is charging simply by plugging the power cable into it directly, without using the charging dock. 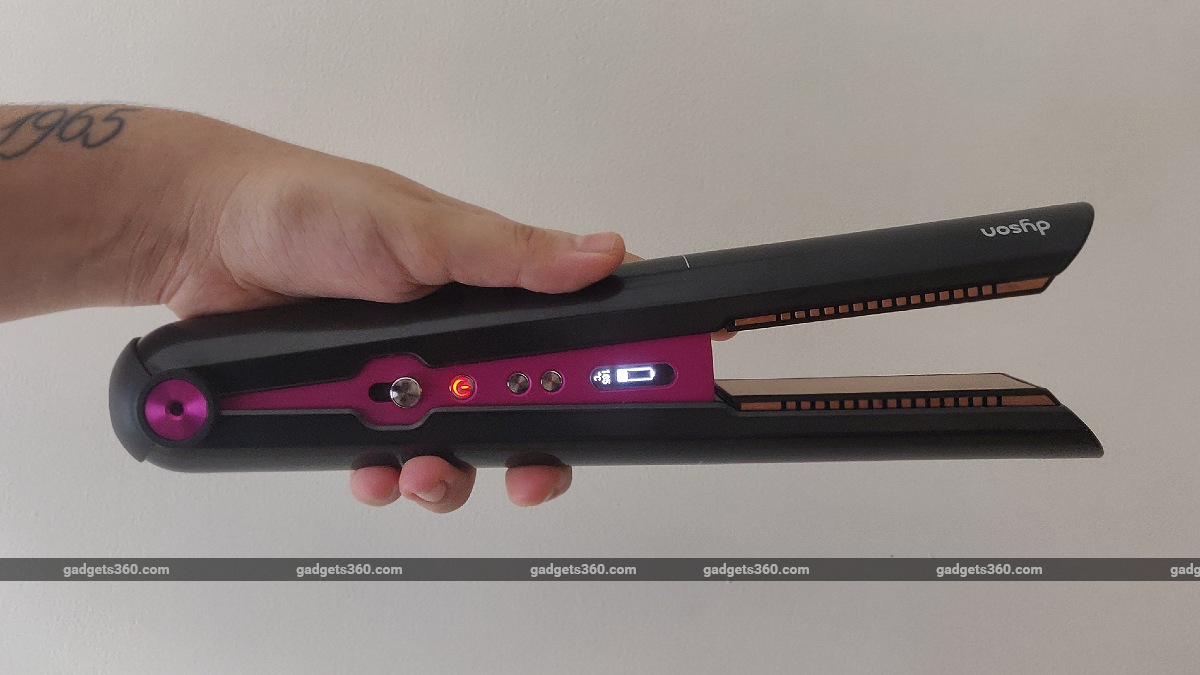 As per Dyson, this is the only hair straightener to use flexing plates

Besides promising significantly less hair damage, the USP of the Corrale is the fact that it's a portable, cordless product. After charging the Corrale, you can use it practically anywhere for 30 minutes. From the comfort of your bed, in the car on the way to a party, sitting on a toilet seat…you can go crazy with it, especially since you're paying this kind of money.

Dyson has put helpful styling guide videos on its website for different desired hair looks – smooth and sleek, beach waves, soft waves, and trade curls – as well as tips for different hair types. These are useful, and help understand how to use the product better.

For me, the end result of using Dyson Corrale was straight, smooth hair, without any hiccups. I expected the battery to last slightly longer, though. I felt as though I had to plan my usage in advance and make sure the straightener was fully charged so I didn't run out of power mid-way.

In a roundtable session on the Dyson Corrale Straightener where Gadgets 360 was present, Rory Fisher, Engineer, RDD Personal Care, Dyson, said that the effect of the product would last as long as it would with any other straightener. My hair did maintain its style until I washed it three days later, though the hold did start wearing off after the first day, like it does with all other straighteners. If I had to fault the Dyson Corrale straightener for anything – besides its price – it would be its weight.

The Dyson Corrale straightener has a Flight-ready feature that has been designed to adhere to International Civil Aviation Organisation (ICAO) regulations. When enabled, the battery is physically disconnected and so you can carry the Corrale safely in your hand luggage, although it's advisable to check with each airline before taking it with you. Universal voltage support means it will work in any country.

Is it worth the price ?

Coming back to the price tag, the Dyson Corrale costs significantly more than I thought any hair straightener could. I don't know too many people who'd shell out this amount of money, even for a luxury product. Despite its fancy features, it feels out of reach for the average Indian looking for an answer to their hair problems. 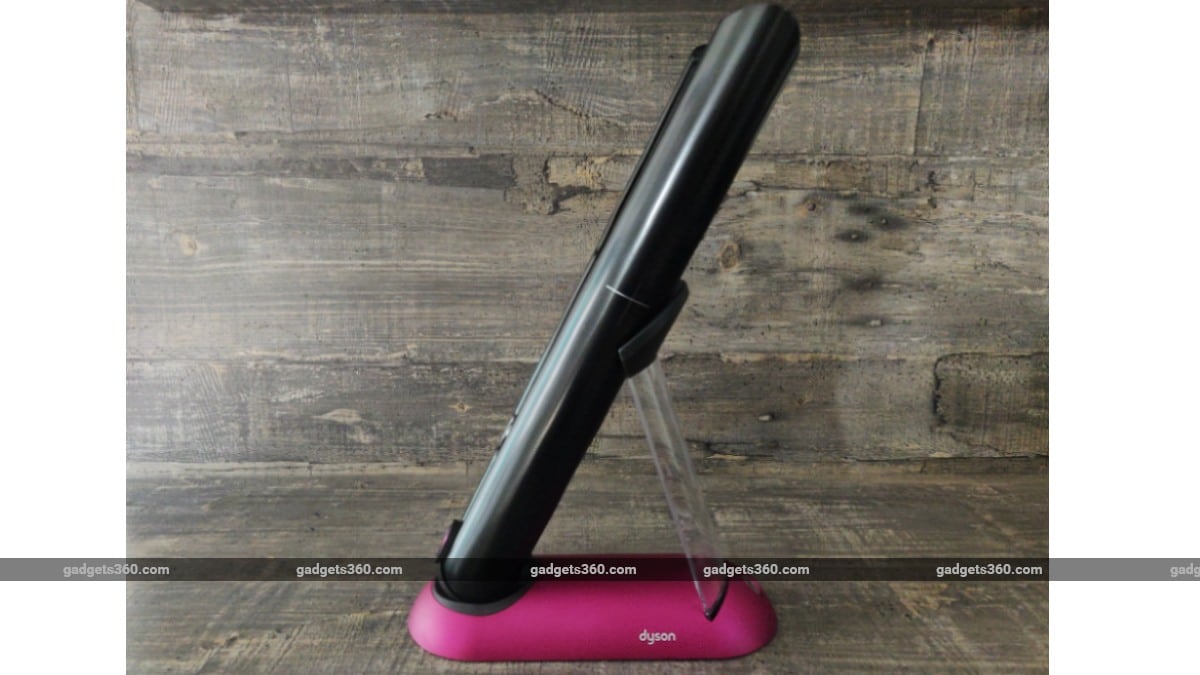 That being said, if you use a hair straightener almost every day, it could be worthwhile to upgrade to a product that claims to reduce damage by 50 percent – that's a huge figure. If you are always on the go, the wireless feature is also a big, big plus.

The price of the Corrale had me thinking it would be an absolutely mind-blowing experience. In reality, it was pleasant to use, but didn't seem much different to using any other straightener I've tried before, in the many attempts to salvage my hair. However, the promise that my hair damage was cut in half did reduce my guilt about not caring for my hair. If you can shell out this kind of money, and use hair straighteners more than a couple of times a week, the Dyson Corrale is a product you might want to consider investing in.