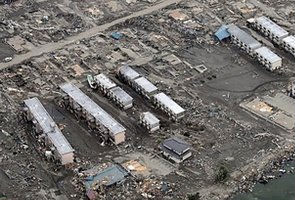 Highlights
Zynga, maker of popular social networking games such as "FarmVille," said Monday that its players have raised $1 million for Save the Children's Japan relief efforts.

Zynga spokeswoman Dani Dudeck said in a message on her Twitter feed that the money for the Japan Earthquake Tsunami Children in Emergency Fund was raised in 36 hours.

"We at Zynga are grateful that we can offer some assistance to Save the Children by mobilizing our technology, people and amazing community of players to support this organization in providing aid to the children of Japan," the company added in a blog post.

Zynga asked users to donate money through the purchase of virtual goods in FarmVille, CityVille, FrontierVille and its other games.

All of the proceeds from the purchase of sweet potatoes in CityVille, radishes in FarmVille or kobe cows in FrontierVille are going towards Save the Children's relief efforts.

Zynga has raised millions of dollars in recent years through similar campaigns, most notably for the relief efforts in Haiti.

Zynga is one of a number of US technology giants offering digital ways to donate to Japan's recovery from the massive earthquake and devastating tsunami.

Apple has set up an option on iTunes to allow users to donate from $5 to $200 to the American Red Cross and the Red Cross has launched a campaign on Facebook through the social media giant's Causes function.

Twitter is providing information and advice as well as directing people to resources on the ground and offering ways to donate to help survivors.

Google's Crisis Response page offers a "person finder" service for people searching for information about friends or family and other resources.
Comments