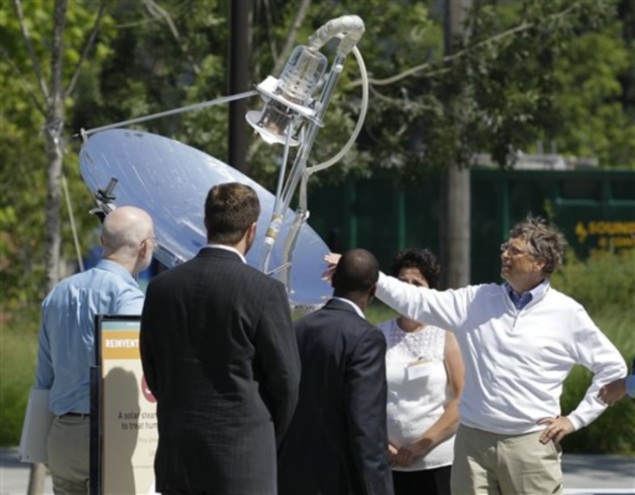 A revolutionary toilet fuelled by the sun is being developed to help some of the 2.5 billion people that lack safe and sustainable sanitation around the world, and will be unveiled in India this month.

The biochar can be used to both increase crop yields and sequester carbon dioxide, a greenhouse gas.

The project is part of the Bill & Melinda Gates Foundation's 'Reinvent the Toilet Challenge', an effort to develop a next-generation toilet that can be used to disinfect liquid and solid waste while generating useful end products.

Linden's team is one of the 16 teams around the world funded by the 'Reinvent the Toilet Challenge' since 2011.

All have shipped their inventions to Delhi where they will be on display from 20 March to 22 March for scientists, engineers and dignitaries.

"The invention consists of eight parabolic mirrors that focus concentrated sunlight to a spot no larger than a postage stamp on a quartz-glass rod connected to eight bundles of fibre-optic cables, each consisting of thousands of intertwined, fused fibres," Linden explained.

The energy generated by the sun and transferred to the fibre-optic cable system can heat up the reaction chamber to over 600 degrees Fahrenheit to treat the waste material, disinfect pathogens in both faeces and urine and produce char.

Biochar is a valuable material. It has good water holding capacity and it can be used in agricultural areas to hold in nutrients and bring more stability to the soils.

A soil mixture containing 10 percent biochar can hold up to 50 percent more water and increase the availability of plant nutrients.

"Additionally, the biochar can be burned as charcoal and provides energy comparable to that of commercial charcoal," Linden added.

Tests have shown that each of the eight fibre-optic cables can produce between 80 and 90 watts of energy, meaning the whole system can deliver up to 700 watts of energy into the reaction chamber, said Linden.

While the current toilet has been created to serve four to six people a day, a larger facility that could serve several households simultaneously is under design.

Unsafe methods to capture and treat human waste result in serious health problems and death. Notably, food and water tainted with pathogens from faecal matter results in the deaths of roughly 700,000 children each year.