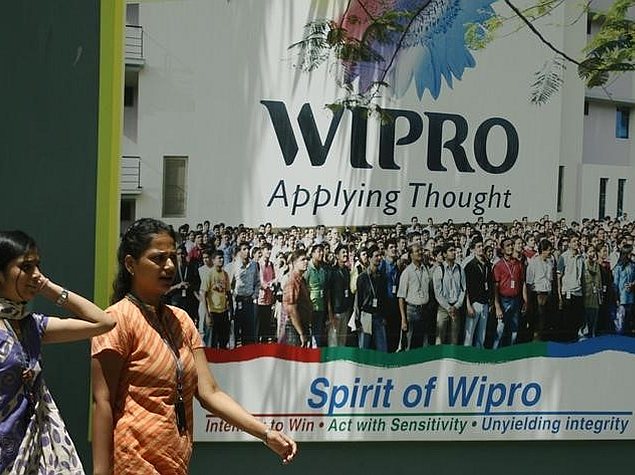 The Bengaluru-based firm also announced appointment of Rishad Premji, the son of Wipro founder and Chairman Azim Premji, to the company board.

Revenues from its IT services business increased 6 percent year-on-year to Rs. 11,240 crores (up 3.2 percent to $1.77 billion) in the reported quarter.

The company has forecast its IT services revenues for the April-June 2015 quarter to be in the range of $1.76 billion to $1.79 billion.

In the meanwhile, Rishad Premji's appointment to the Wipro Board is said to be a long-awaited move that brings the heir apparent closer to the top spot at the country's third largest IT services firm.

Rishad has for long been speculated to be a natural choice for taking over the company's operations.

"Rishad Azim Premji is appointed as Whole-time Director of the company with effect from May 1, 2015. He has played a critical role in defining the company's strategy and driving its mergers and acquisitions function," a statement said.

He is already on the Board of Wipro Enterprises, the FMCG and infrastructure engineering arm, as well as Wipro-GE (joint venture between Wipro and General Electric in Healthcare).

He is also on the Board of the Azim Premji Foundation.

"Rishad will continue to run Strategy and Mergers & Acquisitions in addition to his new responsibilities overseeing the Technology Office, Investor and Government Relations and Wipro Ventures," it said.

Since joining the firm in 2007, Rishad has moved from heading Special Projects in the banking and financial services vertical to Chief Strategy Officer three years later.

Apart from investor and government relations, Rishad was also given the reigns of the CTO office earlier this year.

While Azim Premji has always maintained that Rishad will not be appointed the chief executive, industry watchers have maintained that the son is being groomed to take on that role at a later stage.

Azim Premji directly owns 3.78 percent in the company, while entities related to him own close to 70 percent. Rishad had a direct ownership of 0.03 percent shares in Wipro at the end of March 31, 2015.

"He brings a unique blend of exceptional strategic insights, understanding of the technology landscape and diverse business expertise... These past eight years have given Rishad an in-depth view of the organisation and makes him well positioned to guide Wipro and carry the mantle of ownership in the years ahead," Wipro Independent Director and Chairman Board Governance and Nomination Committee Ashok S Ganguly said.

In 2014, Rishad spearheaded the setting up of Wipro Ventures, a $100 million fund focused on investing in new age startups building cutting edge technologies.

Prior to joining Wipro, Rishad worked with Bain & Co and had also been associated with GE Capital in the US. He did his BA in Economics from Wesleyan University and holds an MBA from Harvard Business School.
Comments