Watch Google's Self-Driving Car Hit a Bus in This Video 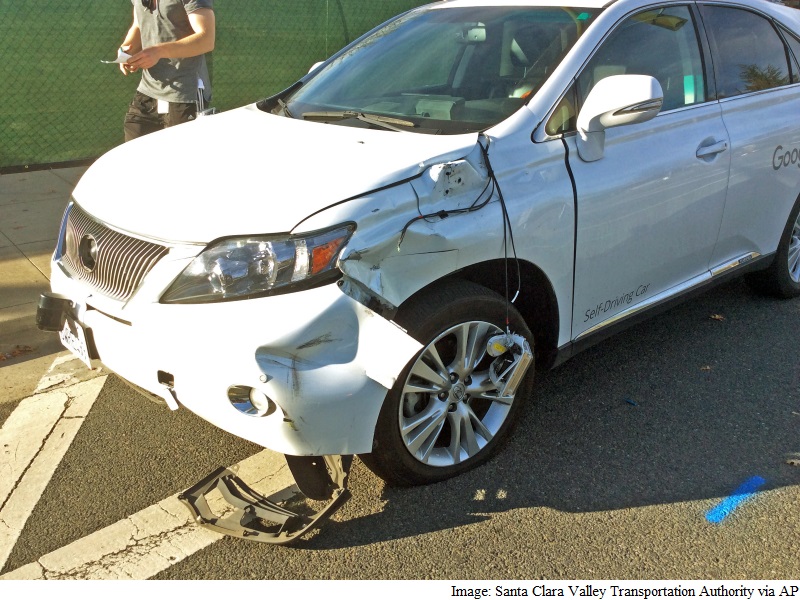 Newly released video shows the moment a Google self-driving car learned the hard way not to tussle with a public bus.

The collision happened on Valentine's Day, when a Google vehicle struck the side of a public bus in the Silicon Valley city of Mountain View. Footage recorded by cameras on the bus shows a Lexus SUV, which Google has outfitted with sensors and cameras that let it drive itself, edging into the path of the bus that was rolling by at about 15 mph.

It was the first time in several years of testing on public roads that a Google self-driving car prototype caused a crash. Google has blamed other drivers for past collisions during testing, but, in a first, accepted at least partial responsibility for this crash.

The Santa Clara Valley Transportation Authority released the video and post-crash photos this week to The Associated Press under a public records request.

Though it was a low-speed collision, the impact crumpled the Lexus' front left side, flattened the tire and tore off the radar Google installed to help the SUV perceive its surroundings.

The Lexus had to be towed. Neither the Google employee in the driver's seat - who must be there under California law to take the wheel in an emergency - nor the 16 people on the bus were injured.

The transit agency has concluded based on the footage that the bus driver was not responsible, spokeswoman Stacey Hendler Ross said. An independent claims adjustor has not yet determined liability, she said.

Here are a few other things to know about the crash and Google's self-driving cars:

Is this the first crash for a Google car?
No. The February 14 crash is the first in which Google has acknowledged its car made a mistake that led to a collision.

Google has reported that between September 2014 and November, its prototypes drove themselves about 400,000 miles on city streets near its Silicon Valley headquarters without causing a collision.

Its fleet has likely driven an additional 100,000 miles since then, though the company won't be specific. According to Google's accounting, its cars have been hit nearly a dozen times on the streets in or around its Mountain View headquarters since road testing began in spring 2014.

(Also see:  The Big Question About Driverless Cars No One Seems to Have an Answer To)

How did the crash happen?
The Lexus intended to turn right off a major boulevard but stopped after detecting sandbags around a storm drain near the intersection, according to an accident report Google filed with the California Department of Motor Vehicles.

Photos show two small, black sandbags on either side of a drain at the curb. The right lane was wide enough to let some cars turn and others go straight, but to avoid driving over the sandbags, the Lexus needed to slide to its left within the lane. The bus and several other cars that drove straight were to the left of the Lexus, in the same lane.

When the light turned green, several cars ahead of the bus passed the SUV. Google has said that both the car's software and the person in the driver's seat thought the bus would let the Lexus into the flow of traffic. The Google employee did not try to intervene before the crash.

"This is a classic example of the negotiation that's a normal part of driving - we're all trying to predict each other's movements. In this case, we clearly bear some responsibility, because if our car hadn't moved there wouldn't have been a collision," Google wrote of the incident.

What does the video show?
The footage shows angles from eight onboard cameras.

In one clip, passengers gazing out on a sunny afternoon are jolted to attention by a scraping, crunching sound and the impact, which causes several hand straps to sway.

A camera trained on the driver shows him open his mouth in surprise, then gesture as if to say, "Why did you just hit my bus?"

Surprising move
Google has said that safety is its guiding principle in developing the cars, and that once mature, the technology promises to reduce collisions and deaths dramatically.

The software that controls the cars is programmed to follow all traffic laws and to drive conservatively, the company said.

The law-abiding algorithms that rule the SUV's onboard computer make its decision to try and slip in front of the bus surprising.

Footage shows there was not much more than a full car length between the bus and the GMC Yukon in front of it.

Google said it has tweaked its software to "more deeply understand that buses and other large vehicles are less likely to yield to us than other types of vehicles."