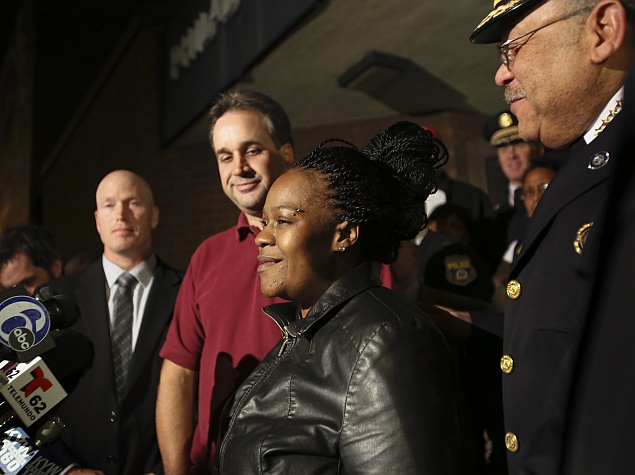 A woman snatched off the streets was rescued with the help of a GPS tracking device that had been installed on the suspect's car by the dealer in case it needed to be repossessed, authorities said Thursday.

It was just the latest arrest made possible by the surveillance technology that is seemingly everywhere nowadays. And it involved not just GPS but surveillance video, traffic-camera imagery and a left-behind cellphone.

Carlesha Freeland-Gaither, 22, was resting at her mother's home in Philadelphia after a three-day ordeal that ended in Jessup, Maryland, on Wednesday when federal agents surrounded the car and seized the kidnapping suspect, who was lying next to her in the back seat.

"My understanding is she continued to fight throughout this ordeal," Philadelphia Police Commissioner Charles Ramsey said. "She's really a very, very strong young woman and just very, very lucky to have survived this."

The FBI filed a kidnapping charge Thursday night against the man accused of abducting her, Delvin Barnes, 37. He also faces unrelated state charges that he abducted and attempted to kill a 16-year-old Virginia girl.

Police did not disclose a motive for the Philadelphia kidnapping. Court documents said Barnes confessed and told authorities he didn't know his victim.

Her rescue came after authorities spotted the used-car dealer's name on a traffic camera photo of Barnes' vehicle and recognized the dealership as one that routinely puts GPS devices on its cars, said sheriff's Capt. Jayson Crawley, of Charles City County, Virginia.

"We called the dealership, and within five minutes they had the location," he said.

He said the dealership sells to customers with poor credit and relies on GPS when it needs to find and repossess cars whose owners have fallen behind on the payments.

GPS devices are commonly used by law enforcement authorities around the U.S. to track suspects and make arrests. But often those cases involve devices secretly planted by police.

Though aided by technology, the Philadelphia kidnapping investigation began in a decidedly old-fashioned way: with a witness who saw it happen Sunday night and immediately called police. Police quickly discovered the abduction had been caught on video.

"We believe she left it for us to find," said Detective James Sloan.

The surveillance video showed Freeland-Gaither being grabbed by a man and pulled toward a car as she struggled to get away in Philadelphia's Germantown neighborhood.

In the days afterward, police and federal authorities released a stream of images from surveillance cameras of a man using Freeland-Gaither's ATM card and walking through a gas station minimart in Maryland.

Barnes served eight years in prison for a 2005 assault on his estranged wife and her family in Philadelphia. Barnes beat and choked her, punched her mother in the face and hit her father in the head with a glass bowl, court records show.

He is also charged with abducting a teenage girl in Richmond, Virginia, last month. Authorities said he clubbed her in the head with a shovel, put her in the trunk of a car and took her to his home, where he doused her with gasoline and began digging a hole. She escaped.

On Thursday, a Maryland judge ordered Barnes sent to Virginia following a hearing in which he answered yes-and-no questions and did not have an attorney with him.

Agents with the federal Bureau of Alcohol, Tobacco and Firearms agents found his vehicle, its rear window kicked out, on a road in Jessup, with him and Freeland-Gaither inside. A witness to the abduction had said the young woman kicked out some of the car's windows before it sped off.