US rules partially against Kodak in Apple dispute 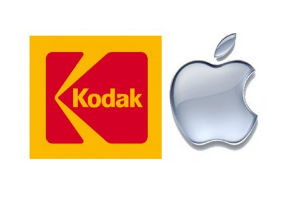 The trade-dispute arbiter in Washington, D.C., said it is essentially agreeing with one of its judges, who threw out the photography pioneer's claims.

The federal agency did find limited patent infringement. It also sent some matters back to the judge for further review, and Kodak could still prevail in the remaining claims.

"This is a negative for Kodak because they didn't win," said analyst Shannon Cross of Cross Research in Livingston, N.J.

Although there's a chance Kodak could prevail on remaining matters, she said, "it seems like the chances that you'd get a large settlement are much smaller."

Chief Executive Antonio Perez had hoped Kodak could draw up to $1 billion from its deep-pocketed rivals.
Kodak held out hope.

Kodak is "gratified that the commission has decided to modify in our favor the judge's initial recommendation," said Laura Quatela,
Kodak's chief intellectual property officer. "As we have said from the start, we remain extremely confident this case will ultimately conclude in Kodak's favor."

Apple and RIM did not return calls or email messages seeking comment.

Kodak, a 131-year-old photography pioneer based in Rochester, N.Y., argued that image-preview technology it patented in 2001 was infringed by iPhone maker Apple Inc. of Cupertino, Calif., and BlackBerry maker Research in Motion Ltd. of Waterloo, Canada.

The commission decided to "affirm in part" a ruling issued in January by its chief administrative law judge. That decision found no patent violation.

The commission revised definitions for "motion processor" and "still processor" and asked the judge to decide whether Kodak's patent was infringed with those changes.

The commission also found that Apple and RIM infringed on a patent related to "initiating capture of a still image while previewing a motion image."

The commission ruled that Apple and RIM did infringe a Kodak patent under the commission's revised definition of "at least three different colors."

It did not rule on any penalties. The commission can order Customs to block imports of products made with contested technology.
Monetary settlements often result to avoid such import bans.

A revised decision is expected no earlier than Aug. 30 after the judge rules on pending matters.

The ruling came after the stock market closed. Kodak's stock fell 56 cents to $3.02 in after-market trading.

The dispute centers on technology Kodak created for extracting a still image while previewing it in the camera's LCD screen. In 2009, the trade commission ruled that South Korean mobile phone makers Samsung Electronics and LG Electronics infringed the same patent, resulting in $964 million in payouts.

The maker of cameras, film, photo kiosks and inkjet printers is struggling to redefine itself as a 21st-century powerhouse in digital imaging.

It has amassed more than 1,000 digital-imaging patents since the 1970s, and almost all of today's digital cameras rely on those inventions. It has licensed digital technology to at least 30 companies, including cellphone makers such as Motorola Inc. and Nokia Corp.

Mining its rich array of inventions for repeated cash infusions has become an indispensable tactic driven in large part by Kodak's long and painful digital turnaround.

Kodak has a promising array of new businesses, but it needs to tap other sources of revenue before investments in those areas have time to pay off.

It is hoping four growth businesses - consumer inkjet printers, high-speed commercial inkjet presses, workflow software and packaging - will more than double in size to nearly $2 billion in revenue in 2013, accounting for 25 percent of all sales.