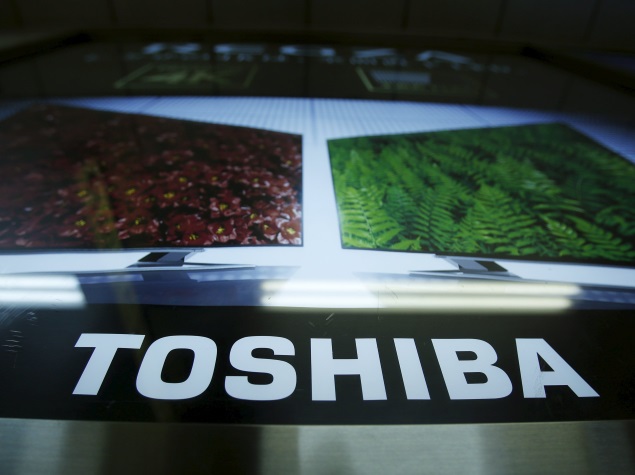 Toshiba president Hisao Tanaka and his predecessor Norio Sasaki resigned on Tuesday over a $1.2 billion (roughly Rs. 7,630 crores) accounting scandal blamed on management's overzealous pursuit of profit that has battered one of Japan's best-known firms.

The two men were among eight high-level executives and directors at the sprawling conglomerate to take the fall, stepping down after an independent report found senior management complicit in a years-long scheme to pad profits.

In a stinging indictment, the report by a company-hired panel said managers were involved in "systematically" inflating profits over several years, in one of the most damaging accounting scandals to hit Japan in recent years.

"It has been revealed that there has been inappropriate accounting going on for a long time, and we deeply apologise for causing this serious trouble for shareholders and other stakeholders," said a company statement.

"Because of this Hisao Tanaka, our company president, and Norio Sasaki, our company's vice chairman... will resign today."

Tanaka, 64, and Sasaki, 66, both joined Toshiba in the early Seventies.

Sasaki served as Toshiba president between June 2009 and June 2013, covering most of the period during which the company inflated the profits.

Chairman Masashi Muromachi will take over as president in the interim, the company said.

The panel, headed by a former Tokyo prosecutor, painted the picture of a corporate culture where underlings could not challenge powerful bosses who were intent on boosting profits at almost any cost.

"Inappropriate accounting was systematically carried out as a result of management decisions... betraying the trust of many stakeholders," according to a summary of the report released by the firm late Monday.

"Toshiba had a corporate culture in which management decisions could not be challenged," it added, ahead of the release of the full report on Tuesday afternoon.

'Damage credibility'
Despite the storm engulfing the company, Toshiba shares jumped Tuesday as the report ended months of uncertainty about the extent of the accounting problems, and who was to blame.

Analysts said the share price jump was the result of some investors buying back into the battered stock, which had lost more than 20 percent since May.

"The numbers are out and investors have no further reasons to sell for the moment, so we are seeing some repurchasing momentum," Mitsushige Akino, executive officer at Ichiyoshi Asset Management, told Bloomberg News.

The scandal risked further fallout, including lawsuits, but was unlikely to bring one of Japan Inc.'s giants to its knees, said SMBC Nikko analyst Yutaka Ban.

"While the profit downgrade isn't a small amount of money, it should not significantly harm the company's credit strength," Ban said.

"This could damage the credibility of the Japanese market," he warned.

The embarrassing findings come less than two months after the country adopted a long-awaited corporate governance code that backers hoped would usher in a new era of transparency for shareholders in Japanese firms.

In May, Toshiba warned over the ballooning accounting "irregularities" and yanked its earnings forecast a JPY 120 billion (roughly Rs. 6,104 crores) net profit on sales of JPY 6.7 trillion for the past fiscal year.

The findings mean Toshiba will have to restate its profits by JPY 151.8 billion for the period between April 2008 and March 2014. It is unclear whether it will affect the fiscal year ending March 2015.

"In some cases top management and division leaders appeared to have shared a common objective to inflate profits," the panel said.

Best known for its televisions and electronics, including the world's first laptop personal computer and DVD player, Toshiba has more than 200,000 employees globally and also operates in power transmission and medical equipment.

Among the divisions affected by the inflated profits are the infrastructure, audio-visual and semiconductor businesses, the summary said.