This Startup Is Working to Turn Hoverboards Into Reality 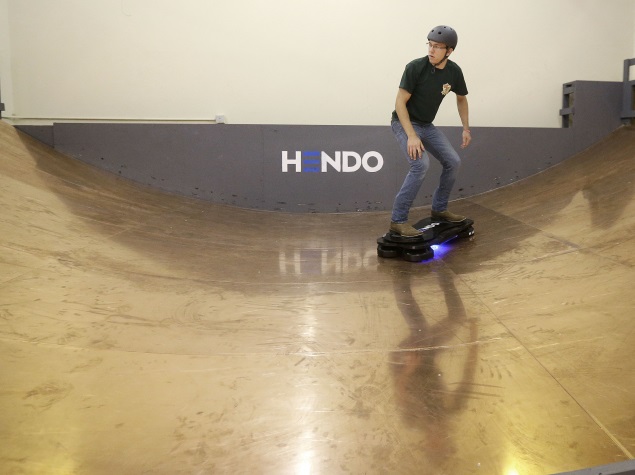 The more your knees quiver, the more the 90 pound board you're perched on, floating above a pillow of air, seems about to shoot out from under your feet. A high-pitched engine scream bounces from the sheet of copper as you swivel and glide your way a few feet forward.

Skateboarding is going airborne this fall with the launch of the first real commercially marketed hoverboard which uses magnetics to float about an inch off the ground. The creators believe their technology will someday be used to transport large containers or hold buildings above earthquakes as the ground shakes below. But for now, it's all about fun, as demonstrated in a recent practice session.

"You can very much tell that it's frictionless so you just smoothly move along, and it's odd because you can move in all directions," said engineer Kyle O'Neil, seated on a copper ramp where they test their products wearing helmets and safety lenses.

But there are some catches. The Hendo currently only works for about 15 minutes before it needs recharging and can only operate over metal surfaces. And that price tag: $10,000 (roughly Rs. 6,15,400).

Greg and Jill Henderson, co-founders of the firm Arx Pax which developed the Hendo Hoverboard, envision much more.

Sketches of hoverboard parks where people could rent boards and ride up and down ramps, much like skateboard parks, are already pinned to the walls. 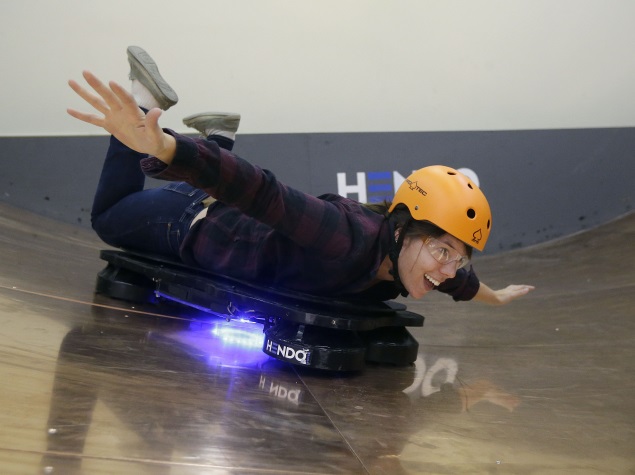 "This is not the end, this is just the beginning of where this technology can go," Greg Henderson said in his makeshift labs in the Silicon Valley enclave of Los Gatos. He's definitely thinking big.

"The wheel has served us very, very well, and we're not taking the wheel head on, but there are certain places where this may be more appropriate than the wheel," he says.

Here's how it works: four dinner plate-sized hover engines on the bottom of the board create a magnetic field that induces a secondary magnetic field in a conductive surface, in this case copper, although aluminum - even under concrete - works as well. Magnetic levitation trains, currently operating in Asia, work on similar principles.

Henderson said the board is the most efficient way of communicating what the technology can do.

"When you discover that you can levitate a dynamic load in a stationary position, can you think of anything more exciting than a hoverboard?"

Hoverboards captured public interest in the "Back to the Future" trilogy when character Marty McFly hopped on one to escape attackers. There have been some real attempts, and some hoaxes, since then.

The current prototype, designed in part by surfboard shaper Bob Pearson, is broader and wider than a typical skateboard, and fairly slow.

But Henderson is delighted with what they've done so far.

"Last month the Wikipedia entry for Hoverboard said this was a fictional device. It doesn't say that anymore," he said.