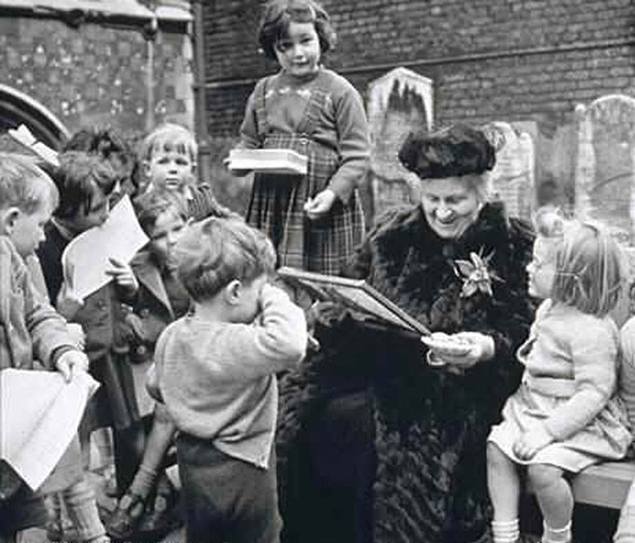 As a girl, she was a curious and strong willed and as a young woman decided to study medicine. Maria Montessori was the first female student to graduate from the University of Rome Medical School in 1896 and the first woman to practise medicine in Italy.

Shortly after she graduated, Dr. Montessori was chosen to join a delegation from Italy for the International Women's Conference in Berlin. At the conference address speech, she expressed her opinion on the rights of women, which attracted a lot of praise from press around the world. In 1899, she also attended the International Congress of Women in London where she spoke about child labourers in Sicily and garnered much support.

In the same year, the Minister of Education proposed that Dr. Montessori lecture a group of teachers and students enlightening them on the methods she proposed for the education of mentally-challenged children.

The following year she helped open a training institute for teachers and a small demonstration school for the mentally deficient. Dr Montessori then travelled to London and  Paris to find ideas on how to educate  children with special needs.

Upon her return to Rome, she spent many hours working with teachers and children, incorporating ideas from the founder of kindergarten, Froebel and educators Itard and Seguin.

After two years of work and research, her methods brought surprising results with several mentally-challenged children passing the public exams. This fuelled her dedication to continue working and find out the reason for normal children being under achievers.

The turning point in Maria's life came in 1906, when she was asked to help unsupervised children in the San Lorenzo quarter of Rome. This marked the establishment of the first 'Casa dei Bambini', or 'Children's House' on January 6, 1907. She tested her ideas with 50 poor and illiterate children between the ages of two and six.

She combined her child-centred approach to education with methods she tried with the retarded children. The results drove her to dedicate the remaining part of her life to children.

In the early 1930s, the Italian government helped Dr. Montessori to set up Montessori schools, but in vain. The schools were soon shut down when she refused dictator Benito Mussolini's demands for the children to wear fascist uniforms and to give the fascist salute.

Maria left for Spain which was grappling with the spanish Civvil War. In 1937, she found a new home in Netherlands. But it wasn't long before she found herself persuading governments to stop war preparations and promote "education for peace". SHe however left Europe, only to return in 1939.

A 77-year old Maria visited England and began work to develop ideas for families and babies from birth to age 3. Despite her old age, she continued to travel, lecture and teach on a wide scale.

Dr. Montessori was of the belief that a radical reform of education was vital to bring peace to the world. Her noble intentions sought to place children at the centre of society in an attempt to make them caring, self motivated and fulfilled individuals. She dedicated her life to this humble cause and her educational values have been embraced across the world in various Montessori schools.