The battle's on for control of the video dial tone 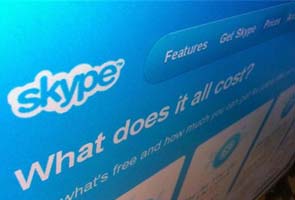 Highlights
Cisco Systems Inc's attempt to convince a European court to impose tougher conditions on Microsoft Corp's acquisition of Skype signals that technology companies are gearing up to battle for control of what some say is the next big thing: videoconferencing.

As the networking giant scrambles to safeguard its market leadership and ownership of a technology that is crossing over from business into the consumer world, rival players like Polycom Inc and Citrix Systems Inc are devising their own user-friendly solutions.

All will contend with Microsoft, which analysts say plans to integrate Skype into its products, potentially boosting the allure of its software and a future crop of Windows devices.

The teleconferencing market is small, but its growing popularity among consumers and its widening use in mobile phones make this struggle -- waged through courts, mergers and regulators -- a crucial one.

"Video is the new world ..., and you will see lots of acquisitions, lots of lawsuits, and those who are behind will use patent litigation," said Krish Ramakrishnan, chief executive officer of videoconferencing service Blue Jeans Network.

Research firm Infonetics forecast that video would be the top trend in telecoms. The global enterprise videoconferencing market will hit $5 billion in 2015 compared with $2.2 billion in 2010.

Videoconferencing is on the brink of widespread adoption. New services and software are enabling a high-speed Internet connection and standard desktop computer, smartphone or tablet to provide quality similar to the expensive systems that were once confined to corporate boardrooms.

In fact, free chat services such as Apple Inc's FaceTime, Skype and Google+ are slowly making video a part of everyday life for many users outside of the workplace.

But one thing holding back its growth is that the technology is often proprietary. That makes many services incompatible with each other, so callers on Skype cannot hook up with people using Polycom, the No. 2 videoconferencing player, for example.

Text messaging did not become ubiquitous -- and create dependable revenue streams for operators -- in the United States until the middle of the last decade, after mobile providers agreed to work together and allow people to send messages regardless of their carrier.

On the surface, that's Cisco's main gripe with the Microsoft-Skype deal, which closed in October.

Cisco argues that the deal will impede interoperability and that Microsoft will be able to lock in businesses that want to reach Skype's 700 million account holders if it integrates the acquired technology exclusively into its Lync Communications Platform.

Cisco Chief Executive Officer John Chambers said that when the company acquired Norway's Tandberg in 2009, the EU approved the deal under the condition it stick to open standards. Now it wants to ensure Microsoft does the same.

Most analysts and industry experts say Cisco fears it could lose its dominant position if Microsoft does a good job of absorbing Skype, which already allows a combination of business and consumer usage. Many companies, including computer consultancy Capgemini, already use Skype as an unofficial video tool, and millions of consumers worldwide take advantage of it.

But industry observers also argue that given Microsoft's less-than-stellar track record on innovation, Cisco can afford to sit back and relax.

"I am surprised they are still pursuing regulatory relief and using interoperability as a fig leaf for it," Ovum analyst Ian Jacobs said. "Cisco needs to let Microsoft do what it does best and stifle innovation of its own products."

Ex-Microsoft President Dick Brass once described how the company had developed a tablet PC as early as 2001, but it was doomed because of internal opposition.

"Buying Skype was one of Microsoft's most brilliant moves in a long time," said Joseph Coyle, Capgemini's North American head of technology. "They'll pose a big challenge to Cisco unless they stumble."

Microsoft Chief Financial Officer Peter Klein said at the Goldman Sachs technology conference earlier this month that the company's Lync platform appealed to enterprise, or business, customers, but can't be used with someone outside a company's firewall or with an incompatible system.

Enter Skype. Klein said the company had been looking at ways to extend Skype through all of its offerings, from Lync to its Xbox videogame console.

Whether Microsoft will prevail remains to be seen, but if industry experts are correct, videoconferencing companies will make more moves to elbow competitors out of the way.

"Everyone is trying to create an island...and this (Cisco appeal) is more about slowing down the inevitable," Ramakrishnan said, adding it was only a matter of time until the intersection between enterprise and consumer video forced vendors to work together.

Microsoft itself recently filed a complaint with the European Commission against Motorola Mobility , which it said was trying to block its products that play video and connect wirelessly by charging too much for patents.

"If the slow-moving service providers and technology companies cannot keep up with where the world will be in a year," Jacobs said, "they will try to hold the world back so it will be where they are in a year."

But such "legal wrangling" will leave room for smaller companies offering videoconferencing for businesses, he added.

Jacobs said he also expected some acquisitions as rivals jostle to fill niche areas in their video portfolios.

Cisco has a vested interest in keeping rivals at bay. Its Tandberg purchase, which filled a crucial gap between its high-end TelePresence conferencing products and WebEx desktop video service, made the company the dominant player in the market.

And it has the added benefit that video requires ample bandwidth as well as advanced network equipment, resulting in sales of routers and switches -- the keys to managing Internet traffic and also Cisco's bread and butter business.

Now, Cisco is keen to find new networking functions and is betting heavily on video, which CEO Chambers predicted "will not only be the leading way we communicate, it'll be the primary form of IT."

However, Cisco likes to be the one-stop shop for all of its customers' needs, and it repeatedly touts the benefits of a single vendor strategy.

It remains to be seen how Cisco will grapple with the new technologies and slew of rivals gearing up to take their slice of the video communications pie. It is still strong in the enterprise segment, but times are changing, analysts say.

"We've been long-time WebEx users," said Donald Tom, associate vice president of IT services at TCS Education System. But he noted that its three affiliated colleges and graduate schools recently switched to Citrix's GoToMeeting HD Faces for video communications among their more than 5,000 students.

"We found it easy to use," he said. "The video is rock-solid. It really can change how we teach and learn."

Capgemini's Coyle said the company had once had a lot of Cisco gear. "But we're backing off," he said. "Their biggest challenge will be around price point."

Bernardo de Albergaria, who heads Citrix's online collaboration business, said users were looking for simpler solutions because the high cost of infrastructure and maintaining it.

"Bring a laptop and a webcam, and you're set," he said. "Why do I need to buy a very complex solution now that there's easy-to-use other stuff?"

Others like Polycom choose to make their technology compatible with those of their competitors.

Jim Kruger, Polycom's senior vice president of solution marketing, described Cisco as "one vendor trying to do all, rip and replace everything and then take Cisco."

But like Cisco, Polycom is under pressure from companies such as Citrix and Vidyo, whose videoconferencing systems run on virtual servers, making dedicated gear and services unnecessary.

In addition, young people moving into the workplace expect to bring their own mobile devices and have them work smoothly, with instant video and data access.

"It is simply a matter of what the coexistence of multiple systems will look like, and who will dictate the terms of that coexistence," Ovum's Jacobs said.

Cisco will fight hard to make sure it dictates those terms.

"They have added a lot of management muscle (to video)," Mizuho Securities analyst Joanna Makris said. "They definitely do not want to lose this case."

Intel to invest $100 mn in car technology innovation
TomTom, HTC in pact for apps in India