Tesla Shows Off Its Self-Driving Car Technology on Video 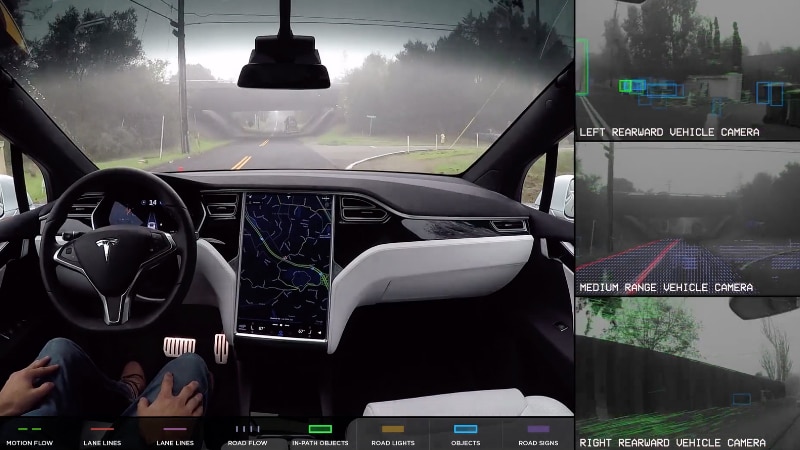 American automaker Tesla has released footage showing off its progress in the driverless car technology space. The video comes after Tesla announced in October that all of its future cars will come with the technology that will allow it to drive around on its own.

The self-driving demo was shared by CEO Elon Musk via a tweet. The footage is shot from the car's POV (point of view) showing all the hurdles or in-path objects that the technology recognises to ensure a seamless journey, even in areas with traffic signals and other cars on the road. The video shows how the car manoeuvres through by-lanes with ease, stopping at signals, recognising when to slow down by understanding hurdles and objects in front of it.

The footage shows how the software in the car recognises in-path objects, people, road signs, road lights, and even lane lines, all of which are assigned in different colour codes. The video has a man sitting in the driver's seat to abide by the law of the government; however, the man is seen doing nothing through the duration of the drive. He is neither steering the wheel, nor has his legs on the brake or accelerator. Throughout the duration of the footage, the driver has his hands firmly resting on his lap.

At the end of the journey, the driver gets out of the car without parking, and the car recognises an empty spot and parks itself seamlessly without any manual intervention. This footage is monumental in terms of the progress Tesla has made in the autonomous driving space. Google is of course working on a similar project.

Apple on the other hand has been reported to have ditched its Apple Car efforts, and instead focus on the new autonomous driving software - based on its augmented reality research efforts. The company even hired the former head of BlackBerry's automotive software division as new leadership for Apple's car team. Building software is a calculated move, as it leaves the options open for the company to decide if it wants to partner with or acquire an established car maker, rather than build a car itself. With Apple having difficulties in building an autonomous vehicle, it's commendable that Tesla already has vehicles ready to ship with the software.