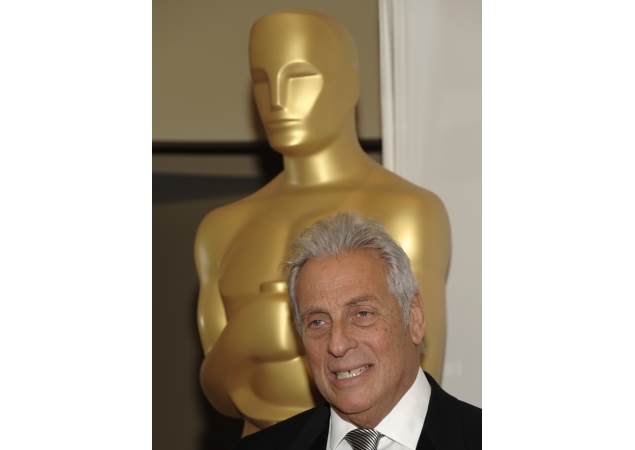 A room full of engineers, computer whizzes and technicians brought the crew of the Starship Enterprise down to Earth for a night at the Sci-Tech Oscars.

Zoe Saldana and Chris Pine hosted the annual awards dinner in which the Academy of Motion Pictures Arts and Sciences beams its spotlight on the latter half of its name.

"We're truly humbled, by all means, man. We can fly into space because of you," Saldana told honorees at the event Saturday night.

The "Avatar" and "Star Trek" star pumped her fist and shouted "WETA!" before the first of two teams from the New Zealand-based special effects house, which worked on "Avatar," took the stage.

Pine and Saldana took turns attempting to describe technical accomplishments like "pose space deformation" and "wavelet turbulence." Pine allowed that one software innovation was too complex for "dumb actors" to fully comprehend.

It was a mostly rare brush with Hollywood glitz for the 26 men who received plaques, certificates and one statuette on a stage adorned with four large Oscar statues.

Steve LaVietes, a backend pipeline architect at Sony Pictures Imageworks, said he often had to "dispel the misconceptions of friends and family members about our glamorous lifestyle. Mostly because we sit in the dark typing and drawing diagrams on whiteboards."

"Just for tonight we can let that slide because what's more glamorous than the crew of the Starship Enterprise?" he said. He was being recognized for work on Katana, software used in "The Amazing Spider-Man" and "Paranorman" that allows artists to make changes efficiently to large computer graphics scenes.

Richard Mall, honored for creating the Matthews Max menace arm rig used to place lighting in hard-to-reach spots on sets, choked up after thanking his parents.

"I kind of just built something in my garage," Mall said. "I'm a little nervous because as a key grip for 36 years, if I see a camera in front of me, I'm in the wrong place."

Visual effects supervisor Bill Taylor noted in receiving one of the night's top honors that the green- and blue-screen pioneer Petro Vlahos, a two-time Oscar winner, was near death.

"He created the whole of composite photography as we know it at this time," Taylor said of Vlahos, who he described as a mentor. "Whenever you see Mary Poppins dancing with penguins, when you see Pi in a boat in the middle of the ocean you are seeing Vlahos' genius at work."

Saldana, who danced to the house band during lulls in the presentation, was the lone woman on stage. Many of the winners noted long hours spent away from families and thanked their wives for support of what Drew Olbrich of PDI/DreamWorks termed "all my geeky endeavors."

New app could use your cellphone to forecast storms
Samsung Galaxy Tab 2 311 with Jelly Bean now in India for Rs. 13,900