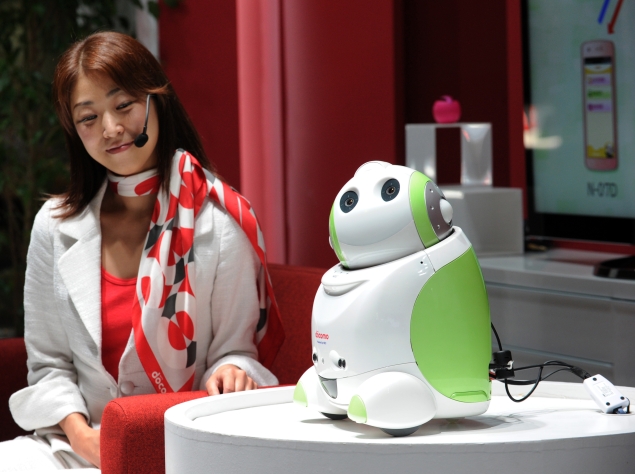 It's a concept straight out of sci-fi flicks!

Scientists are developing a team of coordinating robots that could eventually serve humans in future, relying on networking to accomplish a range of tasks.

Researchers in the Sheffield Centre for Robotics of the University of Sheffield and Sheffield Hallam University, have been working to programme a group of 40 robots, and say the ability to control robot swarms could prove hugely beneficial in a range of contexts from military to medical.

They have demonstrated that the swarm can carry out simple fetching and carrying tasks, by grouping around an object and working together to push it across a surface.

The robots can also group themselves together into a single cluster after being scattered across a room, and organise themselves by order of priority.

Dr Roderich Gross, head of the Natural Robotics Lab says swarming robots could have important roles to play in the future of micro-medicine, as 'nanobots' are developed for non-invasive treatment of humans.

On a larger scale, they could play a part in military, or search and rescue operations, acting together in areas where it would be too dangerous or impractical for humans to go. In industry too, robot swarms could be put to use, improving manufacturing processes and workplace safety.

The programming that the team has developed to control the robots is deceptively simple. For example, if the robots are being asked to group together, each robot only needs to be able to work out if there is another robot in front of it.

If there is, it turns on the spot, if there isn't, it moves in a wider circle until it finds one, researchers said.

"We are developing Artificial Intelligence to control robots in a variety of ways. The key is to work out what is the minimum amount of information needed by the robot to accomplish its task," Gross said in a statement.

"That's important because it means the robot may not need any memory, and possibly not even a processing unit, so this technology could work for nanoscale robots, for example in medical applications," he said.