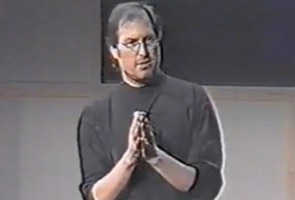 Highlights
It's tough to believe that in 1997, when Steven P. Jobs, Apple's chief executive, stood on stage to unveil a new ad campaign, that Apple's stock hovered around the $4 mark (adjusted for stock splits).

A decade and a half later Apple has surpassed Microsoft's market cap by almost $20 billion, and its stock trades at $241.

The video, which was discovered by All Things D's John Paczkowski, shows Mr. Jobs in his element during the mid-90s, offering a call to arms to reinvigorate the company he built and was ousted from years earlier. Mr. Jobs's weapon: a new ad campaign titled "Think Different."

The video shows a classic Steve Jobs (except for the fact that's he's wearing shorts) offering a convincing argument that Apple can come back from near-bankruptcy, and presenting what Mr. Jobs says is his vision for changing the world.

The "Think Different" campaign was the result of a collaboration between Mr. Jobs and the Los Angles-based TBWA/Chiat Day, which is still Apple's agency of record. And the success of the campaign shows Mr. Jobs's passion for and understanding of marketing and solidly simple advertising.

The ad featured in this video included this voiceover: "Here's to the crazy ones. The rebels. The troublemakers. The ones who see things differently. While some may see them as the crazy ones, we see genius. Because the people who are crazy enough to think they can change the world are the ones who do."
Comments

Can BlackBerry continue in India? Decision likely today
Suspension of BlackBerry service may not give solution: Canada