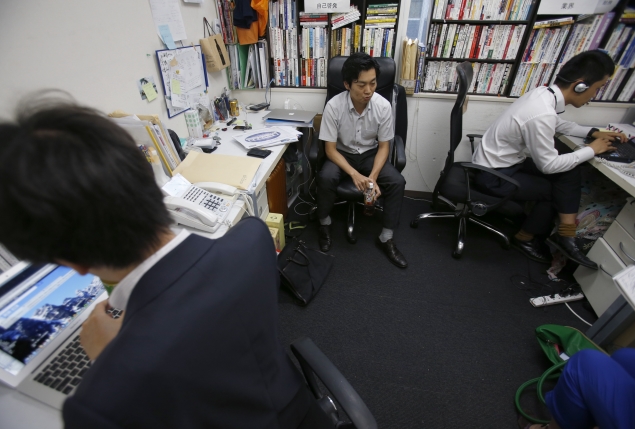 In a shabby back-alley office in Shibuya, a Tokyo district known for youth culture and tech ventures, defectors from corporate Japan are hard at work for a little-known company they fervently believe will be the country's next big manufacturing success.

Like a startup anywhere in the world, its bare-bones setup crackles with an optimistic energy and urgent sense of purpose. What's different, for Japan, is that this startup's talent is drawn from the ranks of famous companies such as Mitsubishi, Michelin and Nissan.

Kohshi Kuwahara, 26, worked for more than two years at electronics giant Panasonic Corp. before hopping to Terra Motors Corp., a little-known venture that pays far less but is out to conquer the world with its stylish electric scooters. As with his colleagues at Terra, he resiled from the hidebound culture of big Japanese companies and felt a deep sense of frustration at their eclipse by rivals such as South Korea's Samsung and America's Apple.

"If you're stuck in a system that promotes just by seniority, it's living a slow death like animals on a farm," said Kuwahara. "I wanted to be in a tough competitive place."

Despite having some of the developed world's least hospitable conditions for starting a new business, Japan's "salaryman" culture of guaranteed lifetime employment at a household-name corporation is no longer the unquestioned ideal.

Ventures are sprouting again after a decade marred by some high-profile failures and a striking aspect is their focus on manufacturing. Facebook and Google they are not. They are Sony and Toyota, all over again - but with young fresh faces.

Terra Motors founder and president Toru Tokushige, 43, said one sign of progress for startups is that these days they have no problems recruiting quality people.

A few years ago, all he could hire were what Japan categorized as the losers, those who had no hopes of getting hired at an established company. As Sony Corp. and other mainstream brands lose their luster, Terra is gaining a chance to shine.

Tokushige's 15 employees now hail from top-name companies, and the interns are enrolled in Hitotsubashi, one of Japan's top universities.

He acknowledges that plans for his tiny company to break into global markets still sound a little crazy by mainstream Japanese standards. But he believes his way of doing business is superior to bigger companies, where decision-making tends to be bureaucratic, slow and oriented toward avoiding risks.

"Mainstream companies started out as ventures. That means old-time Japanese did it," he said of the humble beginnings of Honda, Sony, Panasonic and All Nippon Airways. "We can do it, too."

At their former employers, Tokushige's workers felt stifled, although they were promised stability, status and money. They knew what they could contribute was limited, while at Terra, they can hope to make a crucial and tangible contribution.

"What we want to do is create another Sony or another Honda," said Kazuaki Konno, 35, an engineer who worked previously at Nissan Motor Co. and Boston Consulting before joining Terra.

At a shareholders' meeting in June, Sony President Kazuo Hirai was asked by an investor about an alleged exodus of talent from the company. The investor expressed worries about continued creativity at Sony. Hirai reiterated he would do all he could to keep innovation going, but he did not deny the allegation.

Such defectors are setting a trend, said author Ryuichi Kino, who has written books about the Japanese auto and nuclear industries, and is working on a book about the advent of career switches and job-hopping in Japan.

"These people are searching for their place. For those with talent, they would rather go where they are wanted than endure suffering where they are," he said.

The office of Terra Motors is a tiny room in a building in the crammed slummy Shibuya district known as "Bit Valley," Japan's equivalent of Silicon Valley for housing startups.

Recently, Terra came out with an electric scooter targeting emerging markets that connects to smartphones to gather location-based and electricity-consumption data. They charge from a regular plug outlet.

Terra, set up in 2010, received investment capital from top funds, including one run by former Sony President Nobuyuki Idei. It already has top market share in electric scooters in Japan, and is eyeing overseas markets including Vietnam, India and the Philippines.

Its success so far is against the odds.

The World Bank, in ranking the ease with which a new business can be started, scored Japan 114th among 185 economies. New Zealand was at the top, and the U.S. was No. 13. Singapore was fourth, while Ghana was 112th.

Japan's initial public offerings, at 36 in 2011, make for a fraction of the numbers in the U.S. at 134, according to PricewaterhouseCoopers.

Adding to the obstacles, the prevailing message for the past decade in Japan was that startups were not to be trusted.

The ones that used to get attention tended to be video-game companies such as Gree Inc., which got slammed over the alleged anti-social addictiveness of its games, and the wayward, such as Net services company Livedoor, whose founder was arrested in a securities fraud scandal.

It is only recently that some vigor has returned to ventures. Part of the explanation may be the renewed focus on manufacturing.

Japan's four decades of industrial success after World War II were followed by more than two decades of stagnation, mainly because of the absence of innovation, said Masazumi Ishii, managing director of AZCA Inc., a California consulting firm specializing in international corporate development.

For innovations to happen, poorly performing large companies need to be allowed to fail, and innovative smaller companies must be nurtured and funded, he said.

The technological prowess is there. Japan still produces its share of Nobel Prize winners, ranking eighth in the world, and Japan's top universities file as many patents as do top U.S. universities, according to Ishii.

"Japan has the capability to innovate. But the problem is that this capability does not translate to commercial value."