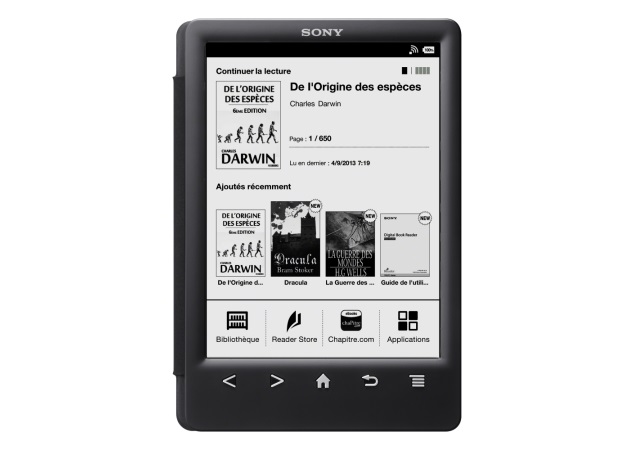 Sony has unveiled its newest e-reader, the Reader PRS-T3 at the IFA 2013.

The Sony Reader PRS-T3 comes with a 6-inch E-Ink Pearl anti-glare display with a resolution of 1024x758 pixels and sports 16 levels of grayscale. It measures 109x160x11.3mm and weighs 200 grams including the weight of the snap cover, which comes bundled with the e-reader.

The new e-reader supports Wi-Fi. It comes with 2GB of internal storage that can be expanded up to 32GB via microSD card. The e-reader can be connected and charged to a computer via a micro-USB. Sony claims that the advanced page refresh technology, can offer users 4 hours of flicker-free page turns and a three minute quick charge can give users enough battery power to read a good 600-page novel, under suitable conditions. Supported ebook formats include Epub, PDF, FB2 and TXT.

The Sony Reader PRS-T3 comes in three colour options - Black, White and Red. The device is expected to hit the European markets in September. However, Sony has not announced the pricing yet.

Other products launched by Sony include the Walkman F886 portable music player which supports 192KHz/ 24bit high-resolution audio formats which the company claims can deliver around six times more audio quality than music recorded on a standard CD. It comes with S-Master HX digital amplifier that can reduce distortion and noise at all frequency ranges. The Sony Walkman F886 portable music player runs the Android 4.1 Jelly Bean OS with access to Google Play Store apps and the device is compatible with Windows and Mac operating systems.

The company also introduced two lens-style cameras, the Cyber-shot DSC-QX100 and the DSC-QX10, which can be attached to smartphones and tablets for an enhanced imaging experience or used independently.

The company also unveiled the flagship smartphone, the Xperia Z1 at the IFA.