Why you should know a site called Mashable 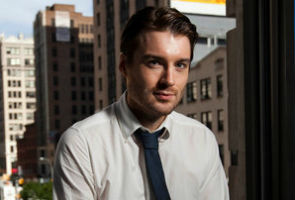 Highlights
Pete Cashmore acknowledged he was nervous. Only a few years ago, he was living with his parents in a small town in northeast Scotland, trying to start a technology blog. Now, at 26, he was about to interview Elie Wiesel, the 82-year-old Holocaust survivor and Nobel Peace Prize winner, onstage at the 92nd Street Y, about the future of ethics in a digitally connected world.

But Mr. Cashmore, the soft-spoken chief executive of Mashable, the one-man blog he turned into a popular news site about social media and digital culture, appeared totally at ease during the lively conversation. And within half an hour, an important measure of success was achieved. Mr. Wiesel, who wondered aloud during the talk what might have happened if Moses -- and also Hitler -- had used social media tools to get their messages across, was trending worldwide on Twitter.

"It just shows the acceleration of the global conversation and that Mashable is a force online," said Mr. Cashmore, whose company worked with the United Nations Foundation and the 92nd Street Y to organize the four-day Social Good Summit in Manhattan late last month.

Standing backstage in a crowded green room with other speakers, including Geena Davis, Lance Armstrong and Serena Williams, he looked up from his smartphone after checking how the conference was doing on Twitter. "We are more important than Charlie Sheen right now," Mr. Cashmore said. "It shows how we can steer the conversation to help the world. We are a very new brand, and I think that this adds a great deal of legitimacy to our cause."

For Mr. Cashmore, the cause has been explaining how online social connections are fundamentally changing the way people communicate, a concept that prompted him to start Mashable at age 19. Bored by schoolwork, he skipped college and began writing about how people were using technology and the new world of social networking. Because he was fascinated by the way some sites were mashing together maps and data -- in particular a combination of Google maps and data from the Chicago Police Department -- he named his new blog Mashable.

Soon the blog was generating $3,000 a month in advertising revenue, allowing him to hire another writer.

Chronicling the rise of social media platforms like MySpace, Facebook, YouTube, Twitter, Tumblr, Foursquare and Google Plus, Mashable steadily increased its audience. In June 2009, it became the most popular technology blog when its Web traffic surpassed that of TechCrunch, according to Compete and Quantcast, two social media measurement firms.

As portals like Yahoo scramble to hold onto an audience that is becoming less drawn to general-interest news, Mashable, Business Insider and Gawker are among a group of smaller niche sites with devoted audiences that are appealing to advertisers. Analysts credit much of Mashable's rise to its skillful use of search optimization and a large catalog of articles about how to use social media tools. Then there's Mashable's influential online audience, which shares and distributes its links across the Web, further fueling the site's growth.

"Pete and his team understood how to use social media when a lot of people were still trying to figure out what it was," said Staci D. Kramer, editor and executive vice president of ContentNext Media, which publishes the popular blog Paid Content. "That made a huge difference. They were able to parlay that cachet and knowledge into a visible role as an ambassador of social media."

This role has enabled Mashable in recent years to form partnerships with big brands and traditional media organizations, like CNN and USA Today. Disney World joined Mashable last May to sponsor a conference on social media in Orlando. Aaron Sherinian, spokesman for the United Nations Foundation, said it made sense to work with Mashable at the 92nd Street Y because of its online audience.

"Our mission is to help the United Nations tell its story," he said. "Power is shifting, and we want to help the U.N. break out of its walls and engage with the people who want to engage with them. And if someone is going to start a digital Davos, it is Mashable."

Mashable, which is privately held, now generates enough revenue from display advertising, custom programs with marketers, event sponsorships and conferences to support an operation of about 40 employees, most of them working from new offices on Park Avenue South. Mr. Cashmore would not disclose revenue or operational expenses but said the site did not rely on private investors for financing. The company has financed its expansion, he said, by steadily increasing revenue and carefully managing expenses. Mr. Cashmore said there were 17 million unique visitors last month, according to Google Analytics.

By hiring a veteran journalist, Mr. Cashmore said he wanted to move toward delivering more original reporting. But building a robust site based on original content is costly. The site is not yet known for its deep reporting, and in fact could suffer from a lingering impression that it is sometimes cheerleading for social media rather than providing critical analysis of them. "As much as I see them break news, I don't think of them as a breaking news site," Ms. Kramer of Paid Content said.

John Borthwick, chief executive of Betaworks, a company that both invests in and works closely with Internet start-ups in New York, praised Mr. Cashmore for expanding content beyond technology because of the appeal to advertisers. He also endorsed the decision to proceed without outside investors.

"It has not held him back," he said. "As an entrepreneur, you maintain control of your own destiny."

Mr. Cashmore is also looking to social media platforms to find creative ways to work more closely with marketers. In February, he ended Mashable's arrangement with Federated Media, the publishing network, and Mashable now manages its own advertising sales.

To lead the effort, he hired Ken Detlet, a Dow Jones advertising sales veteran. Mr. Detlet will work with big consumer brands like Ford, General Electric and Samsung on getting consumers to share information about products in the same way they share content.

For advertisers looking to reach a socially influential audience, Mashable is a good fit, said Ian Schafer, chief executive of Deep Focus, a digital advertising agency. "For reach, and from an authority standpoint, they own the audience," Mr. Schafer said.

But he acknowledged that expanding the site would be harder than starting it. "It is no longer just about the quality of their audience, it is about the size now," he said, adding that it was difficult to "grow very quickly and maintain quality."

Mr. Cashmore acknowledged the challenge, but said he was struck by something Mr. Wiesel had said about the importance of waiting, a concept that seems to be disappearing, he said, during this time of rapid change.

"Waiting has value," he said. "And some things change and then there are things that stay the same."
Comments