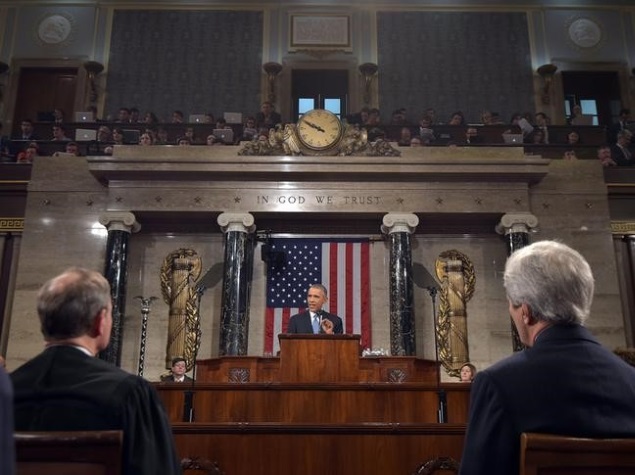 President Barack Obama, whose team is famous for its social media prowess, pleased tech watchers on Tuesday with mentions of Facebook Inc's photo sharing site Instagram and other Silicon Valley companies in his State of the Union address.

The White House set the digital-savvy tone before the speech even started, breaking the tradition of releasing the text of the speech to the media under embargo, and publishing it in full on a blogging website called Medium, launched in 2012 by the co-founders of the social media site Twitter.

Some tech commentators quickly proclaimed the choice as validation for new media platforms. The White House explained it choice as a change needed to end the practice of keeping the public "in the dark" about the text of the speech while select people in Washington got to follow along.

In his speech, Obama focused on ideas aimed at helping middle-class Americans. He touted the progress already made to improve the economy.

"Some of our bedrock sectors, like our auto industry, are booming," he said. "But there are also millions of Americans who work in jobs that didn't even exist 10 or 20 years ago jobs at companies like Google, and eBay, and Tesla."

While the nods to Silicon Valley's contributions to the country's progress are common for Obama, the tech sphere score-keepers were jolted by the mention of a photo sharing site, owned by Facebook.

"In two months, to prepare us for those missions, Scott Kelly will begin a year-long stay in space. Good luck, Captain - and make sure to Instagram it," Obama said, in a quote quickly tweeted out by the White House official account, and re-tweeted by Instagram's own Twitter account.

Kelly, a Nasa astronaut, attended the speech as the guest of First Lady Michelle Obama, and shortly after the speech posted a photo of himself with another guest of hers, recently released Cuban prisoner Alan Gross, in his first Instagram posting since September 2014.

"@amikokauderer couldn't get me to Instagram but #POTUS can," Kelly tweeted after the speech, referring to Nasa public affairs officer Amiko Kauderer.