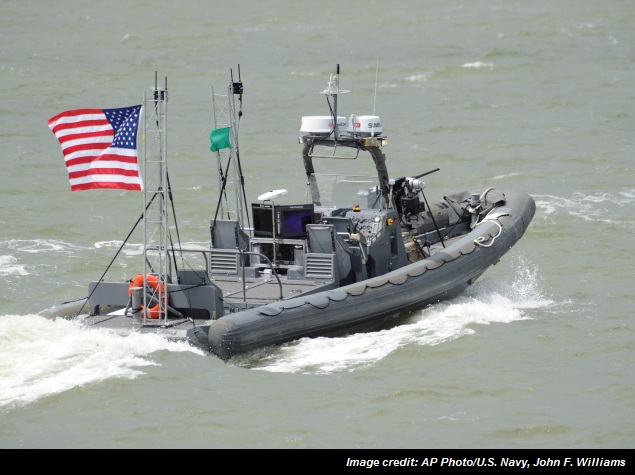 Self-guided unmanned patrol boats that can leave warships they're protecting and swarm and attack potential threats on the water could join the U.S. Navy's fleet within a year, defense officials say, adding the new technology could one day help stop attacks like the deadly 2000 bombing of the USS Cole off Yemen.

The Arlington, Virginia-based Office of Naval Research demonstrated the autonomous swarm boat technology over two weeks in August on the James River near Fort Eustis in Virginia - not far from one of the Navy's largest fleet concentration areas. It said the Navy simulated a transit through a strait, just like the routine passage of U.S. warships through the Strait of Hormuz in the Persian Gulf.

In the demonstrations, as many as 13 small unmanned patrol boats were escorting a high-value Navy ship. Then as many as eight of the self-guided vessels broke off and swarmed around a threat when a ship playing the part of an enemy vessel was detected, the office said, calling the demonstrations a success.

Robert Brizzolara, program manager at the Office of Naval Research, said that the boats can decide for themselves what movements to make once they're alerted to a threat and work together to encircle or block the path of an opposing vessel, depending on that vessel's movements and those of other nearby vessels.

The rigid-hull inflatable patrol boats can also fire .50 caliber machine guns if called upon to do so. However, a human will always be the one to make the decision to use lethal force, officials said. A sailor on a command ship would be in charge of each of the unmanned boats and could take control over any of the boats at any moment. And if communication between the unmanned boats and the sailor overseeing them were ever broken, the boat would automatically shut down.

"I never want to see the USS Cole happen again," said Rear Adm. Matthew Klunder, chief of naval research, speaking about the attack by a small boat packed with explosives that killed 17 sailors and injured 39 on that warship. "I can tell you the systems we just put out on the water would've prevented the Cole."

Brizzolara said the technology is intended to allow sailors who would ordinarily be manning such boats to stay out of harm's way while the self-guided boats seek to "deter, damage or destroy" enemy vessels.

Officials said while the Cole bombing was not the sole inspiration for the program, it was a significant one. Researchers have been working on the technology for about a decade. The kit can be placed on any small vessel and includes sensors and radar that tells it what's happening in the area. Advanced algorithms help the boat plan its route and determine its course of action and speed.

Klunder said that manpower can sometimes be an issue as to why more patrol boats aren't escorting larger ships, and that potential enemies may try to outnumber those boats. He said such technology could put more protective boats in the water, freeing up sailors for key roles aboard ship.

"We've really put our sailors back where they need to be anyway, which is back manning our combat systems, manning our weapons systems, steering our ships," Klunder said.

Klunder said the technology should be rolled out to fleet commanders within a year. He said the parts for the small, transportable kit cost about $2,000 and can be applied to existing patrol boats present at Navy installations and aboard many large warships.

The Navy said some of the components were adapted for from technology originally developed by Nasa for the Mars Rover spaceflight programs. What made the August demonstration so important is that it showed that numerous boats could coordinate with each other, Klunder noted.

He said it's the first time the technology has ever been employed with more than one or two boats. And he spoke of possibly wider applications in the future outside military use.

"This is something that you might find not only just on our naval vessels, we could certainly see this utilized to protect merchant vessels, to protect ports and harbors, used also to protect offshore oil rigs," Klunder said.