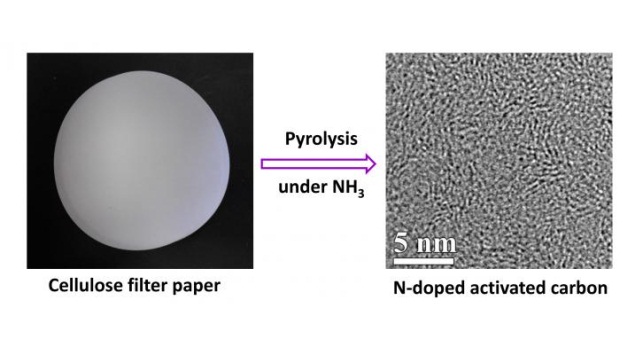 In a major breakthrough, scientists have found a novel way to make high-tech energy storage devices from your neighbourhood tree.

Researchers at Oregon State University (OSU) found that cellulose - the most abundant organic polymer on earth and a key component of trees - can be heated in a furnace in the presence of ammonia and turned into the building blocks for supercapacitors.

These supercapacitors are extraordinary, high-power energy devices with a wide range of industrial applications - in everything from electronics to automobiles and aviation.

The new approach can produce nitrogen-doped, nanoporous carbon membranes - the electrodes of a supercapacitor - during a low cost environment-friendly process.

The only by-product is methane which could be used immediately as a fuel or for other purposes.

"The ease, speed and potential of this process is really exciting," said Xiulei (David) Ji, an assistant professor of chemistry in the OSU College of Science.

"For the first time we have proven that you can react cellulose with ammonia and create these N-doped nanoporous carbon membranes," Ji added.

"We are going to take cheap wood and turn it into a valuable high-tech product," he noted.

These carbon membranes at the nano-scale are extraordinarily thin - a single gram of them can have a surface area of nearly 2,000 square metres.

That is part of what makes them useful in supercapacitors.

And the new process used to do this is a single-step reaction that is fast and inexpensive.

Supercapacitors can be used in computers and consumer electronics, such as the flash in a digital camera.

They have applications in heavy industry, and are able to power anything from a crane to a forklift.

A supercapacitor can capture energy that might otherwise be wasted, such as in braking operations.

"If we use this very fast, simple process to make these devices much less expensive, there could be huge benefits," Ji said in a study published in Nano Letters, a journal of the American Chemical Society.