Lee Jae-yong has effectively been at the helm of the sprawling Samsung group since his father and group chairman Lee Kun-hee was left bedridden by a heart attack in 2014. 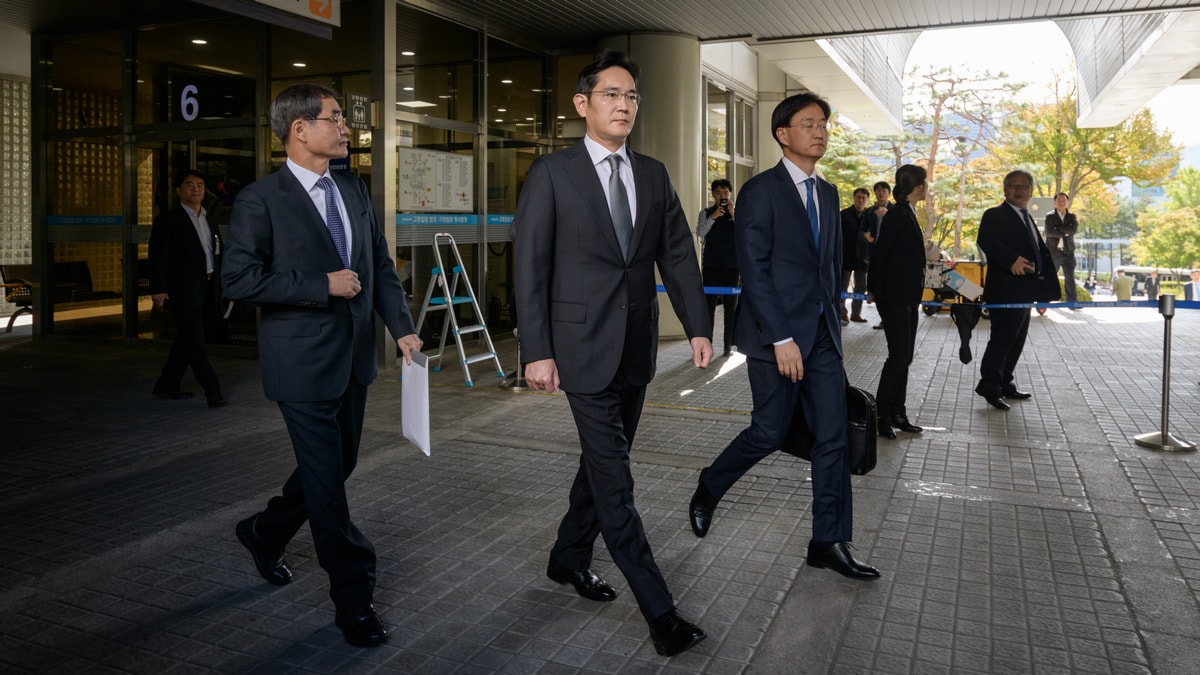 The heir to the Samsung empire arrived at court Friday for a retrial over a sprawling corruption scandal that threatens to disrupt management at the world's biggest smartphone and memory chip maker. Lee Jae-yong is vice-chairman of Samsung Electronics -- where profits have been falling for months -- and was jailed for five years in 2017 for bribery, embezzlement and other offences in connection with the scandal that brought down South Korean president Park Geun-hye.

The 51-year-old was released a year later after an appeals court dismissed most of his bribery convictions and gave him a suspended sentence, but that decision was set aside by the Supreme Court in August, which ordered a retrial.

Accompanied by his lawyers, Lee walked stony-faced into the Seoul High Court for the new proceedings, only telling reporters: "I'm sorry for causing many people concern. I apologise."

The case centres on millions of dollars the Samsung group paid Park's secret confidante Choi Soon-sil, allegedly for government favours such as ensuring a smooth transition for Lee to succeed his ailing father.

The scandal highlighted shady links between big business and politics in South Korea, with the ousted president and her friend accused of taking bribes from corporate bigwigs in exchange for preferential treatment.

The two women were both convicted and given decades-long jail sentences, and are due to face separate retrials of their own.

But the Supreme Court's decision does not bode well for Lee, as it ruled that KRW 8.6 billion ($7.3 million) paid by Samsung should be considered as bribes.

"A bribery case exceeding KRW 5 billion is not eligible for a suspended jail term," independent attorney Shin Jang-sik said. "I think he is likely to return to prison."

Lee has effectively been at the helm of the sprawling Samsung group since his father and group chairman Lee Kun-hee was left bedridden by a heart attack in 2014.

Both Lee's father and grandfather -- Samsung founder Lee Byung-chull -- had brushes with the law themselves but never served time behind bars.

Trial of a century
Samsung Electronics is the flagship subsidiary of the group, which is by far the biggest of the family-controlled conglomerates, or chaebols, that dominate business in the world's 11th-largest economy.

Its overall turnover is equivalent to a fifth of the national gross domestic product and it is crucial to South Korea's economic health, with the business daily Financial News calling the proceedings the "trial of the century".

But it comes with Samsung Electronics battling challenges from the US-China trade war and tough export restrictions imposed by Tokyo on key supplies amid a dispute with Seoul over wartime history.

It has flagged operating profits falling by more than half in the third quarter due to a prolonged global chip market slump, and has faced difficulties with the technology with some of its flagship new devices.

Lee is not being held in custody during the trial, but it is expected to last for months and could deprive the firm of its top decision-maker.

While the firm's daily business is managed by a board of directors, a leadership vacuum would greatly hamper its ability to make major decisions, stockbroker KB Securities said in a report.

The retrial added to uncertainty for the company, said a source with direct knowledge, adding: "There are things that only Lee Jae-yong can do."