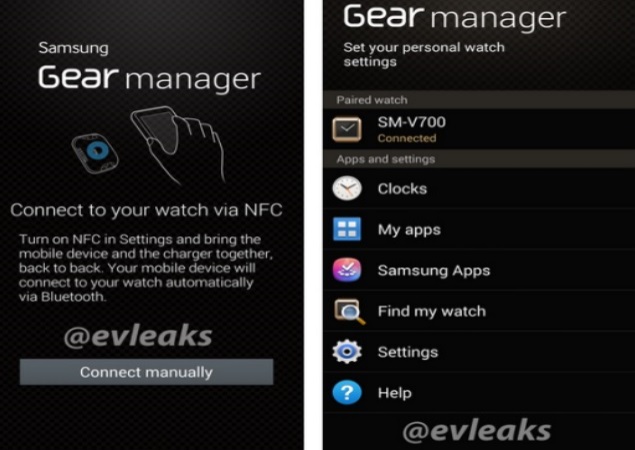 We are just a few days away from the official unveiling of the first wearable tech device from Samsung, and screenshots showcasing its companion app have already made an appearance.

The notorious phone leaker, @evleaks has published two screenshots of the alleged Gear Manager companion app for the Galaxy Gear smart watch on Twitter.The tweet includes the screenshots and says "It's coming..." The screenshots reveal some details about how the companion app would possibly function and its various features.

Some other features that are listed on the manager app's interface include Clocks, My Apps, Settings, Help and Find my watch which may be a Bluetooth or WiFi based locater for the smart watch. The Clocks feature could be related to customisation of the clock faces on the watch.

Additionally, Amongtech has also revealed some of the specifications of the Samsung Galaxy Gear smart watch that are in line with the previous leaks.

The leaked specifications include a 2.5-inch OLED display with a 320x320 pixels resolution, a 1.5GHz dual-core processor, speakers in the watch's strap, accelerometer, Bluetooth, 10 hours of battery life, and 1GB of RAM. The site also claims that the smart watch will come in two variants - 8GB and 6GB. It also notes that the smart watch will run Android Jelly Bean. However, the version has not been mentioned.

Earlier, a Samsung official had confirmed that the company will unveil the next generation Galaxy Note device and the long-rumoured Samsung smart watch at an event on September 4.