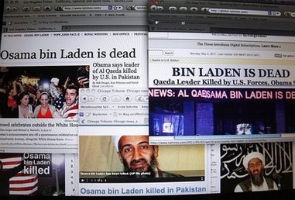 Highlights
An Internet outlet for official messages from Al-Qaeda has accepted its leader's killing and eulogised him as a knight who sacrificed his soul and money to fight the United States, monitoring group SITE said on Monday.

Asad al-Jihad 2, a prominent member of the jihadist Internet community, commended Osama bin Laden for leading a campaign against the United States and its allies, according to the US monitoring group's English translation.

"Islam was fought for centuries and attacked from all sides, so our knight was a dam against them; he thwarted them with his chest, as a mujahid with his soul and money, and he got nothing in return," Asad al-Jihad 2 said.

Earlier, moderators had asked users of the Shumukh al-Islam forum to wait for confirmation of his death before making any more posts, but there was a heavy flow of messages offering prayers and vowing that jihad will continue.

"One forum administrator posted a message demanding that members wait until the news is confirmed by mujahedeen (holy fighter) sources before the members should comment on the matter," SITE said.

It said that some users had posted vague threats against the United States. "America will reap the same if the news (of his death) is true (or) false," one read.

"The lions will remain lions and will continue moving in the footsteps of Osama," said another.