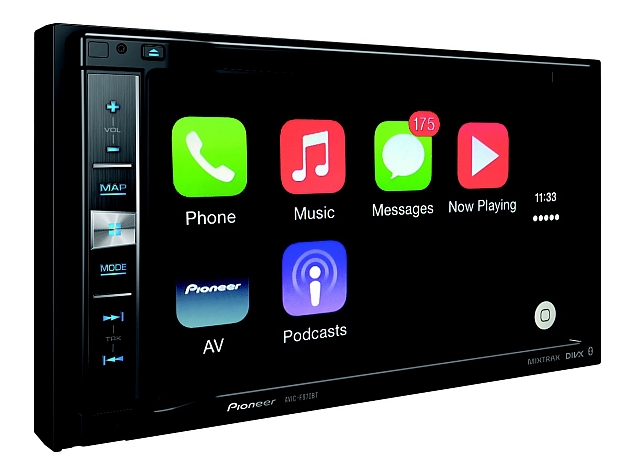 The Pioneer AVIC - F970BT car entertainment system features a 6.2-inch touchscreen and comes with Siri voice control support. Users with an iPhone 5 or later iPhone model can use Siri voice commands to make and receive calls, compose and reply to text messages, and listen to music or podcasts. Users can also also access several apps from their connected iPhone on the entertainment system's touchscreen.

According to the company, Apple CarPlay support is now also available for its Pioneer AVH-X8690BT in-car entertainment system via a downloadable firmware update. Users need to load the 196MB update on a USB drive and plug it into the AVH-X8690BT car system to update its firmware.

"Pioneer has once again proved that we are the leader in Indian In-Car Entertainment industry by introducing the first CarPlay compatible products" said Minoru Ogawa, Managing Director, Pioneer India Electronics Pvt. Ltd during the launch. "It is our constant effort to provide our customers with the latest technologies to make their In-Car Entertainment systems, easy & fun to use. It is our expertise in technology, especially smartphone connectivity with our products, which makes us the first choice of Indian consumers."

Notably in April last year, Pioneer announced the CarPlay feature via a firmware update for its range of NEX (Networked Entertainment eXperience) multimedia systems including the AVIC-8000NEX, AVIC-7000NEX, AVIC-6000NEX, AVIC-5000NEX and AVH-4000NEX models as per the Pioneer website. The AVIC-F60DAB, AVIC-F960BT, AVIC-F960DAB and AVH-X8600BT systems support CarPlay in some countries.

Pioneer was one of several major manufacturers that showcased Android Auto and Apple CarPlay-enabled in-car entertainment systems at CES this year, with some systems featuring support for both rival in-car platforms from Google and Apple.