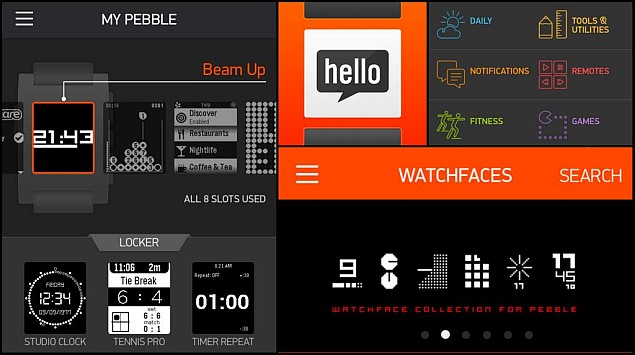 The Pebble 'appstore' for smartwatches is now officially live for iOS users as an update and will be out for Android users "very, very soon," as per the firm. The Android version of the store is currently in beta testing, and is available for developers.

The updated Pebble for iOS app, which includes the 'Pebble appstore' or 'Pebble watchapp directory', has also been given a refresh in terms of interface. The appstore currently sports more than 1,000 watchapps and watchfaces, and is understood to be split in six app categories, notifications and a dedicated Daily apps section. The Daily app section deals with apps which pop-up everyday like "Word of the day" or some reminders.

Pebble has made it clear that it will be placing the most important and useful apps on top of others in the appstore, making it simpler for its users to find what they want. The updated application additionally comes with a new feature dubbed as "Pebble Locker" which manages the software on the smartwatch by enabling the users to easily install and uninstall apps from the watch.

Since Pebble has for now made its appstore official only for iOS users, we are yet to see if any new features and functionalities will be brought to the Android app store version.

Pebble recently launched an updated smartwatch called Pebble Steel. The new watch is slimmer than the original and is made of metal and glass, rather than plastic. It is not an upgrade in terms of specifications and capabilities, but it offers a choice to prospective buyers who might have been put off by the geeky, plastic feel of the original Pebble.

The smartwatch, which began as a Kickstarter project, received a big update with support for iOS 7 notifications back in November 2013. The firm said that other notifications included in the smartwatch are calls, texts and emails, Calendar, Twitter, Facebook, Google+, Instagram, LinkedIn, Flickr, Dropbox, WhatsApp, and Flipboard, among others.