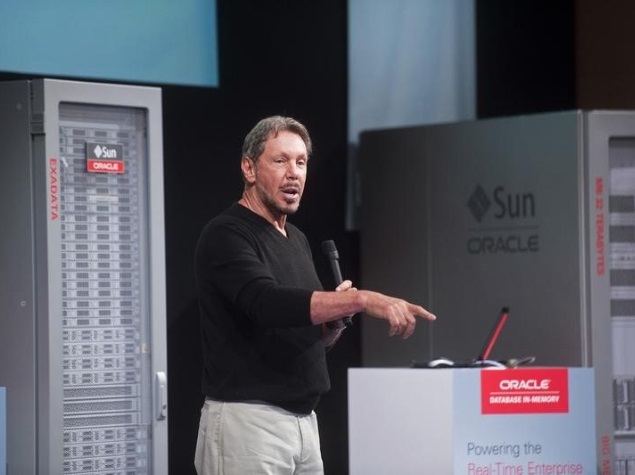 Oracle Corp's Larry Ellison, who is stepping aside as CEO, received $67.3 million as compensation in that role in 2014, a 15.5 percent drop from a year earlier.

Oracle surprised Wall Street last week with the announcement that Ellison would be replaced by presidents Safra Catz and Mark Hurd.

Compensation for Catz and Hurd stood at $37.7 million each for the year ended May 2014, according to a filing with the U.S. Securities and Exchange Commission. (http://1.usa.gov/ZcjMN1)

Ellison, whose 2013 compensation was $79.6 million, will take over as executive chairman and chief technology officer.

Catz and Hurd were granted a special one-time stock option award for 500,000 shares each, taking the options for 2015 to 2.75 million shares each.

In recent years, some investors have opposed Ellison's pay packages, with pension fund advisers complaining that the world's fifth-richest man makes too much money as his company struggles against smaller rivals.

Last year, a majority of shareholders opposed Ellison's pay in a non-binding vote. While the voting result requires no changes from the company, it underscored concern among shareholders about high pay in the face of lackluster financial performance.

Challenges to the 70-year old Ellison's pay package come as Oracle, which he co-founded four decades ago, tries to fend off smaller, aggressive companies offering software and Internet-based products at prices that often undercut Oracle.

Ellison gave up an annual cash bonus of $1.2 million for fiscal 2013 after Oracle missed growth targets and his annual salary was a token $1.

Ellison owns about 25 percent of Oracle.