Not Apple, not Microsoft, some say IBM most valuable company of all time 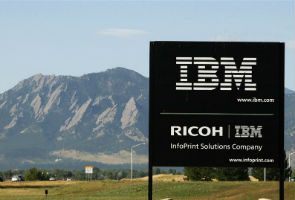 Apple had the Internet buzzing Monday when it claimed the title of the most valuable company of all time. Apple's surging stock propelled the company's value to $624 billion, beating the record for market capitalisation set by Microsoft in the heady days of the Internet boom. Microsoft's 1999 peak was $620.58 billion, according to Standard & Poor's.

However, comparisons to Microsoft, and others, do not take inflation into account. In inflation-adjusted dollars, the Redmond-based software giant was worth around $856 billion on Dec. 30, 1999. Which means Apple has the best part of another $225 billion dollars to add to its market cap before it can overtake Microsoft. Of course, by the time Apple adds that amount, the inflation-adjusted value of Microsoft as on Dec. 30, 1999 would have gone even higher (or lower, depending upon inflation data). In other words, it's a moving target that cannot have a fixed dollar value.

There's another reason why Apple fans shouldn't look at Microsoft's inflation-adjusted value as the number to overtake - it is not the highest inflation-adjusted market capitalisation value recorded by a public-listed company. That number belongs to IBM.

The blog Columbia Journalism Review says IBM's 1967 value of $193 billion is worth around $1.3 trillion in today's money. That means Apple's Monday market cap is not even half of IBM's value back then, after adjusting for inflation.

So what number should you believe? Is IBM the most valuable company of all time, or does the crown belong to Apple? At the end of the day, these are just numbers and titles with little impact on the day to day activities of any of the companies involved. In absolute terms, Apple made history on Monday, while relatively speaking IBM is, of course, way ahead. Let's end the debate and enjoy the innovations that these companies bring to the market.
Comments