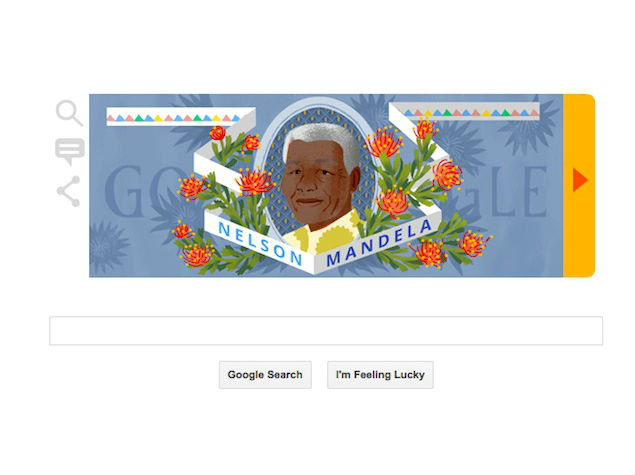 To speak of Nelson Mandela in mortal terms is trying to eclipse the shadow of a person who showed that it was easier to rebuild a nation using love and peace rather than hate and war. Honouring the same spirit of the late South African president, Google on Friday released its latest doodle celebrating the 96th birth anniversary of the charismatic leader. The interactive doodle showcases different stages of Mandela's life, along with quotes from his autobiography, The Long Walk to Freedom.

Nelson Mandela, better known as 'Madiba' and 'Tata' amongst his South African supporters, was born July 18 1918 as Nelson Rolihlahla Mandela to the Thembu royal family. He died last year on December 5 after suffering from pulmonary infection - he was 95 years old then. Mandela, who was also a boxer in his younger days, first became a part of the ANC (African National Congress) and rose to prominence during the ANC's Defiance Campaign in 1952. He started his law practice in 1949, and was majorly involved in helping set free those members of the ANC convicted by the state.

Mandela was unsuccessfully persecuted by the state up until the time he co-founded the armed wing of the ANC - Umkhonto we Sizwe (Spear of the Nation). He was arrested for a sabotage campaign against the apartheid government in 1962 - then convicted, tried and sentenced to life imprisonment. Nelson Mandela first served time at Robben Island, then at Pollsmoor prison and finally at Victor Verster Prison from where he was released following the collapse of the Berlin Wall in 1990.

The doodle shows a picture of Nelson Mandela amidst flowers with the second 'O' being the frame around Mandela's picture. Clicking on the doodle sets off the slide show, with the first depicting a South African village (presumably where Mandela was born) with the quote, "No one is born hating another person because of the colour of his skin, or his background, or his religion."

The next shows Mandela walking into his home in the village, with the quote "People must learn to hate, and if they can learn to hate, they can be taught to love, for love comes more naturally to the human heart than its opposite," written above in the sky.

The third slide shows a boy standing at his doorstep, with a girl standing at the window of the same house, with the quote, "What counts in life is not the mere fact that we have lived. It is what difference we have made to the lives of others that will determine the significance of the life we lead," plastered on the wall.

The fourth slide shows Nelson Mandela in prison during his long 27 year sentence, reading. The accompanying quote in this slide reads, "Education is the most powerful weapon we can use to change the world."

The next slide forms an animated '1994' and the colours of the new flag of South Africa in the background. Mandela had historically taken to calling the country 'The Rainbow Nation' to symbolise the harmony of all people living there irrespective of their caste, colour, creed or gender. The flag disappears into the next slide, which has Mandela making his famous speech at Johannesburg to placate the violence that had broken out and threatened to take South Africa back into civil war and international isolation. The quote in this slide reads, "For to be free is not merely to cast off one's chains, but to live in a way that respects and enhances the freedom of others."

The last slide on Friday's interactive Google doodle has a image of Nelson Mandela on the right, with the words, "The greatest glory in living lies not in never falling, but in rising every time you fall," written alongside.

Mandela was known to be a voracious reader and has often credited the William Ernst Henley poem 'Invictus' with being one of the most powerful pieces of literature that he had read, which inspired him to struggle for freedom and a just society. The same has also been depicted in the Clint Eastwood directed film Invictus where Morgan Freeman portrays the role of the charismatic leader. The incidents of the film, which include the backdrop of the Rugby World Cup of 1995, saw how Mandela taught the black majority to forgive the white minority, despite the decades of hardship and humiliation suffered by the former and inflicted by the latter, to build a reunited South Africa.

Friday's doodle commemorating Nelson Mandela's 96th birth anniversary features caption, search, share buttons alongside. Clicking on the search button, users are directed to Google search results for Nelson Mandela, while the caption button highlights the quote on the slide in text below.