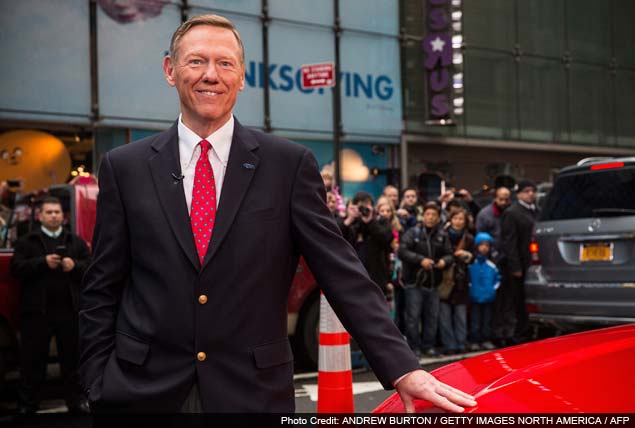 Microsoft shares fell 3 percent Thursday after Ford CEO Alan Mulally said that there is "no change in my plan" to stay with the automaker through the end of next year, dampening some investors' hopes he would take the top job at the software giant soon.

The stock's downturn came despite Mulally's comments on CNBC being no different than what Ford has been saying for months.

The market's reaction indicates investors were hoping the 68-year-old would in fact replace CEO Steve Ballmer, who is set to retire by August at the latest.

"It's clear that the market is hoping that Mulally is the lead candidate," said Morningstar analyst Norman Young.

Ford Motor Co. director Edsel Ford II, the company founder's great grandson, also told reporters at an event for the new Mustang in Dearborn, Michigan, that Mulally is staying with the company through the end of 2014.

Ford spokesman Jay Cooney said in a statement that "nothing has changed from what we announced last November" when the automaker announced Mulally would stay on through 2014. Microsoft said it "does not comment on rumors/speculation."

Mulally is highly respected at Ford for saving the company from financial collapse. Shortly after he was hired away from Boeing Co. in 2006, he mortgaged all of Ford's assets for a huge loan. The $23.5 billion loan paid for a restructuring and helped keep Ford out of bankruptcy protection.

(Also see: Satya Nadella: The Indian-American who could be the next Microsoft CEO)

Mulally and Ballmer are friends and the Microsoft CEO consulted with his counterpart at Ford on a wide-ranging reorganization that Microsoft announced in July. Before taking over at Ford, Mulally spent most of his career at Boeing in Seattle, not far from Microsoft's headquarters in Redmond, Washington. And Ballmer's father worked for Ford for more than 30 years.

Analyst Kirk Materne with Evercore Partners recommended in a research note Thursday that investors buy Microsoft's shares on the temporary dip in price because "the fundamental upside case for Microsoft holds merit even if the board goes in another direction."

Materne said he believes Microsoft will benefit next year from a slower decline in personal computer sales, streamlining under a new CEO and growth in its enterprise and cloud computing business.