Protesters are demonstrating against the now-suspended extradition bill. 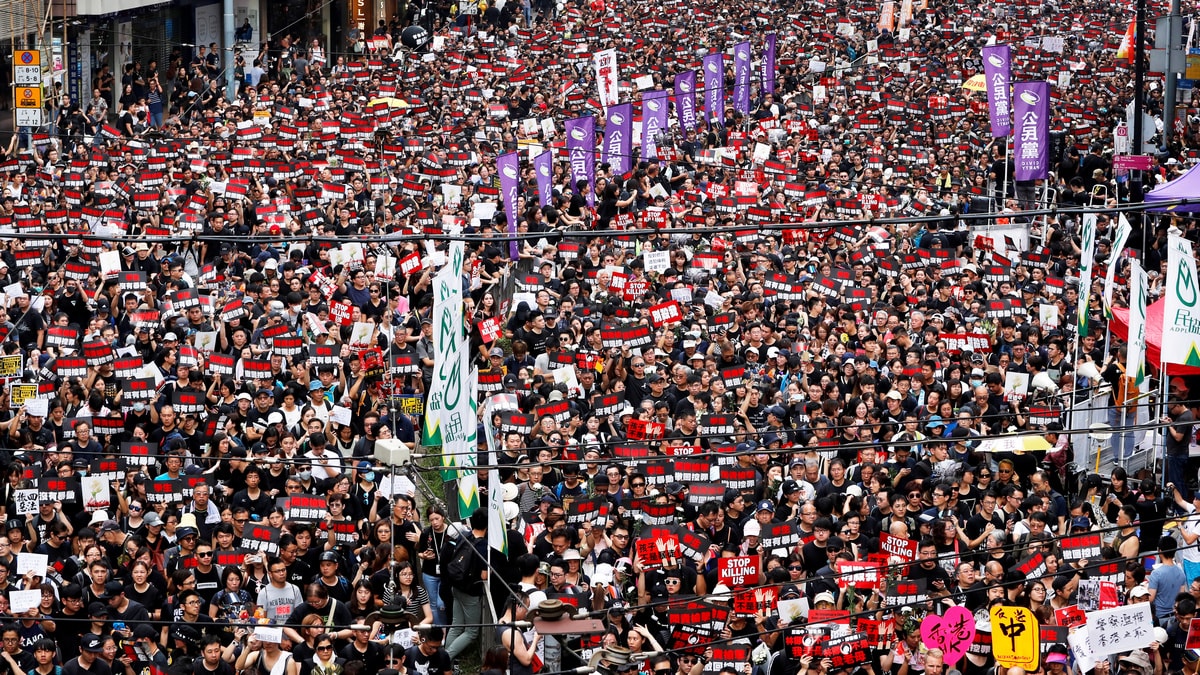 The moment the 25-year-old protester got home from demonstrations that turned violent - tear gas still stinging her eyes - she knew what she had to do: delete all of her Chinese phone apps.

WeChat was gone. So was Alipay and the shopping app Taobao. She then installed a virtual private network on her smartphone to use with the secure messaging app Telegram in an attempt to stay hidden from cyber-monitors.

"I'm just doing anything" to stay ahead of police surveillance and hide her identity, said the protester. She asked to be referred only by her first name, Alexa, to avoid drawing the attention of authorities amid the most serious groundswell against Chinese-directed rule in Hong Kong since 2014.

Protests that expanded over the past week against a bill allowing extraditions to mainland China were marked by something unprecedented: A coordinated effort by demonstrators to leave no trace for authorities and their enhanced tracking systems.

Protesters used only secure digital messaging apps such as Telegram, and otherwise went completely analogue in their movements: buying single ride subway tickets instead of prepaid stored value cards, forgoing credit cards and mobile payments in favour of cash, and taking no selfies or photos of the chaos.

They wore face masks to obscure themselves from CCTVs and in fear of facial recognition software, and bought fresh pay-as-you-go SIM cards.

And, unlike the pro-democracy movement in 2014, the latest demonstrations also have remained intentionally leaderless in another attempt to frustrate police, who have used tear gas and rubber bullets against the crowds.

On Saturday, Hong Kong chief executive Carrie Lam announced the postponement of the extradition bill, saying she hoped to return peace to the streets of the city. But the measure was not fully withdrawn and Lam still expressed support.

Protesters, meanwhile, called for another major show of defiance on the streets on Sunday.

Amid the chaos, Hong Kong has offered a picture of what it looks like to stage mass civil disobedience in the age of the surveillance state.

"The Chinese government will do a lot of things to try to monitor their own people," said Bonnie Leung, a leader of the Hong Kong-based Civil Human Rights Front.

Leung cited media coverage of Chinese use of artificial intelligence to track individuals and its social credit score system.

"We believe that could happen to Hong Kong, too," she said.

The core of the protests is over the belief that Beijing - which was handed back control of the former British colony more than 20 years ago - is increasingly stripping Hong Kong of its cherished freedoms and autonomy.

But the identity-masking efforts by the protesters also reflects deep suspicions that lines between China and Hong Kong no longer exist - including close cooperation between Hong Kong police and their mainland counterparts who have among the most advanced and intrusive surveillance systems.

"It is the fundamental reason people are protesting in the first place," said Antony Dapiran, who wrote a book on protest culture in Hong Kong. "They don't trust Beijing, they don't trust their authorities and the legal system, and they don't like the blurring of lines between Beijing and Hong Kong."

For many who had taken to the streets over the past week, the fight was a familiar one.

In 2014, protesters occupied Hong Kong's main arteries for 79 days demanding full universal suffrage in the territory. Prominent student leaders and activists marshalled up support night after night in mini-cities that had been set up on Hong Kong's thoroughfares, until they were eventually cleared out by police.

Today, all of the most prominent leaders of that movement - Joshua Wong, only a teenager at the time of the protests, legal scholar Benny Tai and Chan Kin-man, a sociology professor - are in jail.

The masses gathered around government buildings this week were without clear leaders. Demonstrators shared protest tips and security measures with people they had met just hours before to avoid a similar fate. Meetups were primarily planned on Telegram, which became the top trending app on the iPhone app store in Hong Kong in the days leading up to the protest.

"Information on personal safety was passed around on Telegram channels and group chats," said Caden, a 21 year-old Hong Kong student in Indiana who returned home early to participate. When he among estimated 1 million marching on June 7 to begin the protest movement.

On the group groups, Caden received a barrage of advice which included changing your username on Telegram so it sounds nothing like your actual name, changing your phone number associated with app and using SIM cards without a contract.

"We are much more cautious now for sure than in 2014. Back then, it was still kind of rare for the police to arrest people through social media," Caden said, declining to give his full name for fear of retribution. "All of this is definitely new for most people there."

Alexa noticed messages on Facebook, used by an older generation of Hong Kongers, warning people to mask their digital footprints and go cashless.

"People keep telling each other not to take pictures during the protest, and only to take wide shots without people's faces on them," she said.

It marked a huge change in sentiment for her, someone who had been attending peaceful demonstrations in Hong Kong with her family for years.

"We'd always take pictures and upload them to Facebook and so on, it would tell people you are there at the scene," she said. "But by now, everyone [has] equated the bill to cracking down on the Hong Kong legal system. We are all afraid that it won't exist anymore."

Hours before Wednesday's occupation of Hong Kong roads, Hong Kong police arrested Ivan Ip, a coordinator of a Telegram group with thousands of people, in his home. He is currently out on bail.

Telegram also reported a massive cyber-attack, which the company said likely originated from China and were timed with the protest.

Samantha Hoffman, a fellow at the Australian Strategic Policy Institute's Cyber Center, said data collection methods used in China have specifically been designed to intimidate people from taking part in demonstrations. She described the strategy as "killing the root before the weed can grow."

"It's a form of preemptive security," she said

Still, researchers say it has been difficult to figure out the extent to which Hong Kong Police Force cooperates with the mainland on surveillance technology and tools.

The Hong Kong force says it sends around 150 officials every year for "ideological and practical" training at elite mainland police academies. A larger number also receive regular training in "hand-to-hand combat, interrogation skills, criminal investigation and gun use," according to news releases from the Chinese government.

Maya Wang, a senior China researcher at Human Rights Watch, said there is "very little transparency" about the cooperation between Hong Kong police and mainland authorities.

Wang also noted that Hong Kong is moving ahead with plans for more "smart city" initiatives - with little clarity on which companies would be assisting them in that task.

"People are concerned that their electronic traces can be collected and monitored as the city becomes more digitised," she said. "What about the Chinese companies that are assisting or involved with the collection of data in Hong Kong? Would they be passing that data back?"

Alexa, Caden and other protesters interviewed by The Washington Post say they remain undeterred and will continue to show up at demonstrations. They have masks and goggles prepared, they say, both as a shield against police tactics like pepper spray and also to avoid potential facial recognition or other surveillance software.

"I do not think this is overly cautious. If we read books by George Orwell and we read histories about Communist Parties, of course this is not overly cautious," said Leung of CHRF.

"If I was not some sort of leader or coordinator of the Civil Human Rights Front, I may wear a face mask as well," she added. "I can totally understand why people would want to hide their identities."