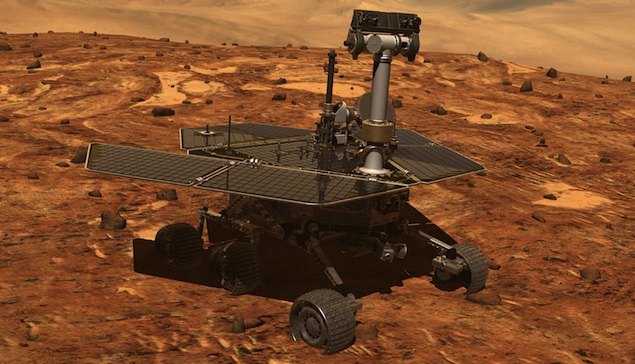 Mars Curiosity rover has analyzed Martian soil for the first time, and found a complex chemistry within the soil, US space agency NASA said.

Water and sulphur and chlorine-containing substances, among other ingredients, showed up in samples Curiosity's arm delivered to an analytical laboratory inside the rover, NASA said in a statement Monday.

Curiosity is the first Mars rover able to scoop soil into analytical instruments. The specific soil sample came from a drift of windblown dust and sand called "Rocknest". The site lies in a relatively flat part of Gale Crater still miles away from the rover's main destination on the slope of a mountain called Mount Sharp, reported Xinhua.

The rover's laboratory includes the Sample Analysis at Mars (SAM) suite and the Chemistry and Mineralogy (CheMin) instrument. SAM used three methods to analyze gases given off from the dusty sand when it was heated in a tiny oven. One class of substances SAM checks for is organic compounds carbon-containing chemicals that can be ingredients for life.

"We have no definitive detection of Martian organics at this point, but we will keep looking in the diverse environments of Gale Crater," said SAM principal investigator Paul Mahaffy of NASA's Goddard Space Flight Center.

CheMin's examination of Rocknest samples found the composition is about half common volcanic minerals and half non-crystalline materials such as glass. SAM added information about ingredients present in much lower concentrations and about ratios of isotopes, which are different forms of the same element and can provide clues about environmental changes.

Curiosity, loaded with the most-sophisticated instruments ever used to explore another world, touched down on the Red Planet Aug 6.

During the next two years, it will use its 10 instruments to investigate whether conditions have been favourable for microbial life and for preserving clues in the rocks about possible past life.

Can you hear me now? Americans love and hate their cellphones
Steam's Big Picture comes out of beta, kicks-off sale on popular gaming titles