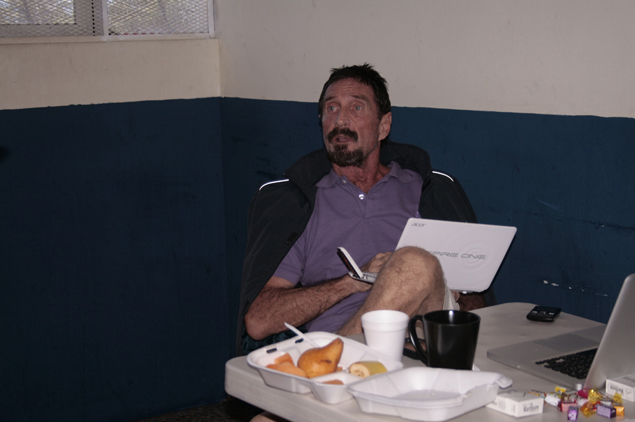 U.S. software pioneer John McAfee, facing deportation from Guatemala to Belize to answer questions over the death of a neighbor, has bought himself some time with legal appeals, the Guatemalan government said on Sunday.

McAfee's lawyers have filed a request with a local court to grant him leave to stay in Guatemala until his legal appeals against deportation have been settled, which could take months.

"The government of Guatemala respects the courts and we have to wait for them to make a decision," said Francisco Cuevas, a spokesman for the Guatemalan government.

The government initially said it would deport him straight away after rejecting McAfee's request for asylum on Thursday.

Guatemala has been holding the former Silicon Valley millionaire since he was arrested on Wednesday for illegally entering the country with his 20-year-old Belizean girlfriend.

Officials in Belize want to question McAfee as a "person of interest" in the killing of fellow American Gregory Faull, his neighbor on the Caribbean island of Ambergris Caye.

The court has up to 30 days to rule on his request, but McAfee's lawyers said on Sunday they expect a ruling in the American's favor as early as Monday.

"We are filing a series of papers with the court to attempt to keep me here long enough for the world to see the injustice of sending me back to Belize," McAfee said in an online news conference on Sunday evening.

McAfee has been evading Belizean officials for nearly a month, saying he fears they want to kill him, and that he is being persecuted for speaking out about corruption in the country's ruling party. Belize's prime minister has rejected McAfee's claims, calling him paranoid and "bonkers."

McAfee's attorney, Telesforo Guerra, said that if his request with the court is successful, McAfee would be allowed to stay in the country until the legal suits have been resolved.

His lawyers have filed several injunctions against government officials, alleging McAfee's rights were violated because his asylum request was not given proper consideration.

McAfee said on Saturday he wanted to return to the United States, and Guerra said he had filed a motion that would require Guatemalan authorities to deport him there and not to Belize.