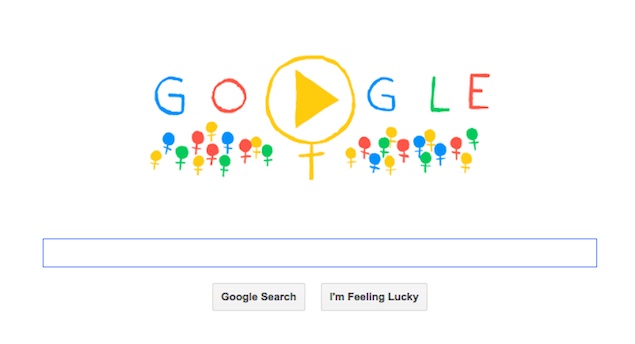 Women's Day 2014 inspired Google to post a video-based doodle on the eve of International Women's Day on Friday. Unsurprisingly, the doodle continues to be showcased on Google's home page in various countries across the globe on the day that celebrates women's achievements in various spheres of life.

In the doodle, the Google logo features a play button in the second 'O' of the logo, which also depicts the Venus symbol for women - a small circle, with a cross below it. The Google logo in turn is surrounded by more Venus symbols. Hitting the play button causes a YouTube video to open up. The video has women from all walks of life wishing people Happy International Women's Day. Amongst other famous female personalities, the video features Malala Yousafzai and Asha Bhonsle.

The video features the new single by Belgian artiste Marie Daulne (also known by her on-stage name Zap Mama) playing in the background, and at the end of the video - which then reads "Happy International Women's Day". On her Twitter page @ZAPMAMAMUSIC, a tweet posted by her on 7 March 2014 reads, "The Doodle with new ZAP MAMA acapella music for the INTERNATIONAL WOMAN's day is launching tomorrow (Friday)"

Google had in 2013 celebrated International Women's Day with a doodle by artiste Betsy Bauer. It had female faces on it with the Google logo carefully cut into it. The theme last year was "A promise is a promise: Time for action to end violence against women."

International Women's Day, which is celebrated every year on March 8, celebrates the achievements of women and focuses on general appreciation, respect and love for the fairer sex. The first recorded celebrations for the same were held on different dates. The earliest one was on 3 May 1908, in Chicago.

In the year 1914, International Women's Day was celebrated on March 8 for the first time. The dates continued to fluctuate till the mid-40's. The UN theme this year is "Equality for Women is Progress for All".