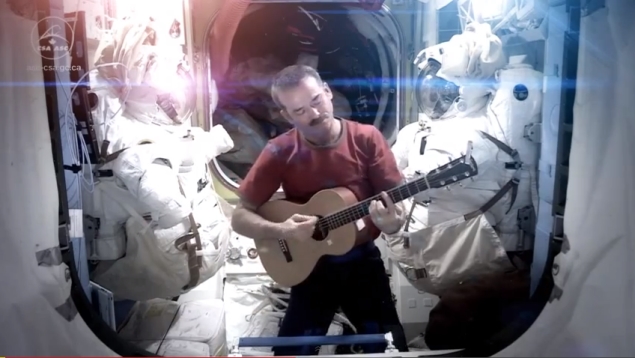 Canadian astronaut and outgoing International Space Station Commander Chris Hadfield has recorded the first music video in space while floating in zero gravity, strumming an acoustic guitar and crooning his own rendition of David Bowie's "Space Oddity" as a special farewell before heading back to Earth.

The lyrics tweaked a bit here and there are particularly fitting

Lock your Soyuz hatch and put your helmet on

Detach from station and may God's love be with you"

Hadfield launched from Kazakhstan as part of Expedition 35 Dec 19, 2012, and took command of the ISS March 13. Since then, he has found time to tweet to more than 800,000 followers, share photos of the galaxy, and wow fans with cool videos of playing guitar and cooking spinach in space.

His video of wringing out a washcloth in zero gravity quickly went viral, netting more than five million views in the days after it was posted.

In short, he made space travel cool.

He tweeted about the video in announcing its release Sunday. And got a reply from Bowie a short while later.

Hadfield turned over control of the space station to Russian Pavel Vinogradov Sunday, and is scheduled to return to Earth and land in Kazakhstan.

"Who'd have thought that five months away from the planet would you make you feel closer to people," Hadfield said in a video about his journey.

The music video is interspersed with shots of the ISS orbiting the Earth and Hadfield floating inside the capsule singing and playing the guitar, and was produced with help from the Canadian Space Agency and Canadian musician Emm Gryner, who played with Bowie's band.