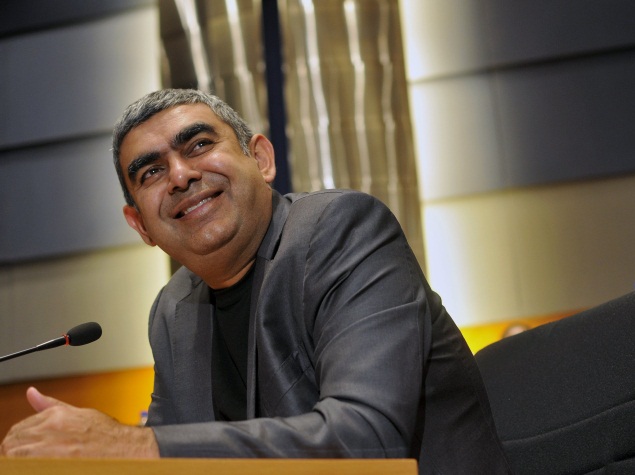 Shares of Infosys surged 11 percent after the announcement, in which the Bengaluru-based company raised its closely watched US dollar-denominated revenue estimate for the year.

Infosys, a bellwether for India's $150 billion (roughly Rs. 9,53,723 crores) IT services industry, has in recent years struggled to innovate and retain market share due to a staff exodus that also hurt its ability to win big deals.

Under Chief Executive Vishal Sikka, brought in about a year ago to chart a new strategy, Infosys has made bets on automation and other high-margin services such as artificial intelligence and digital technology to regain ground lost to rivals including leader Tata Consultancy Services Ltd .

"Efforts in redesigning our clients' experience and our widespread adoption of innovation, both in grassroots and breakthroughs, are starting to bear fruit in large deal wins and in the growth of large clients," Sikka said in a statement.

Infosys also said it kept its rupee-denominated revenue growth view for the business year through March at a range of 10 percent to 12 percent. But it raised its outlook in dollar terms to 7.2 percent to 9.2 percent, from 6.2 percent to 8.2 percent.

For April-June, Infosys said order growth rose 5.4 percent from three months prior, the most in nearly five years. That was bolstered by a surge in demand in the United States, its biggest market, where the company is also listed .

Infosys, which provides IT services to firms such as Apple Inc, Volkswagen AG and Walmart Stores Inc, posted Rs. 30.30 billion ($475.85 million) in net profit in the quarter. That beat the Rs. 28.86 billion of a year earlier, and roughly matched the Rs. 30.20 billion average estimate of 27 analysts, Thomson Reuters data showed.

Staff attrition, or the number of employees leaving or retiring, was 14.2 percent, from 23.4 percent a year earlier.

Shares of Infosys were up 10.7 percent at Rs. 1,108.40 in Tuesday morning trade, versus a 0.2 percent rise in the broader Mumbai market index.

Toshiba President, Top Executives Quit Over $1.2 Billion Scandal
You Can Now Stream Xbox One Games to Windows 10 PCs and Tablets