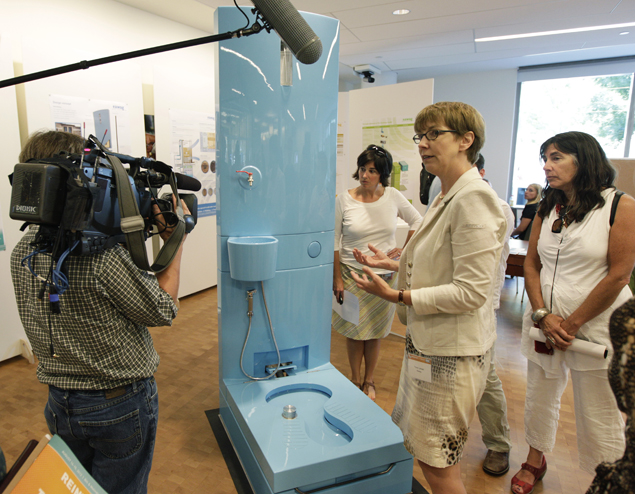 An Indian firm has won a grant of more than $450,000 from the Bill & Melinda Gates Foundation to make public toilets more accessible to the urban poor via the eco-friendly and hygienic "eToilet".

India's Eram Scientific Solutions Private Limited was awarded the grant as part of the foundation's second round of Reinvent the Toilet Challenge grants totalling nearly $3.4 million.

Foundation Co-chair Bill Gates announced the grants Tuesday along with the winners of the first round of Reinvent the Toilet Challenge-an effort to develop "next-generation" toilets that will deliver safe and sustainable sanitation to the 2.5 billion people worldwide who don't have it.

"Innovative solutions change people's lives for the better," said Gates. "If we apply creative thinking to everyday challenges, such as dealing with human waste, we can fix some of the world's toughest problems."

The awards recognize researchers from leading universities who are developing innovative ways to manage human waste, which will help improve the health and lives of people around the world, according to a media release from the foundation.

California Institute of Technology in the US received the $100,000 first prize for designing a solar-powered toilet that generates hydrogen and electricity.

Loughborough University in Britain won the $60,000 second place prize for a toilet that produces biological charcoal, minerals, and clean water.

University of Toronto in Canada won the third place prize of $40,000 for a toilet that sanitizes faeces and urine and recovers resources and clean water.

Special recognition and $40,000 went to Eawag (Swiss Federal Institute of Aquatic Science and Technology) and EOOS for their outstanding design of a toilet user interface.

Teams from 29 countries showcased their prototypes and projects at the Reinvent the Toilet Fair at the foundation's headquarters in Seattle Aug 14 and 15.