In smart watches, a name that's been there before 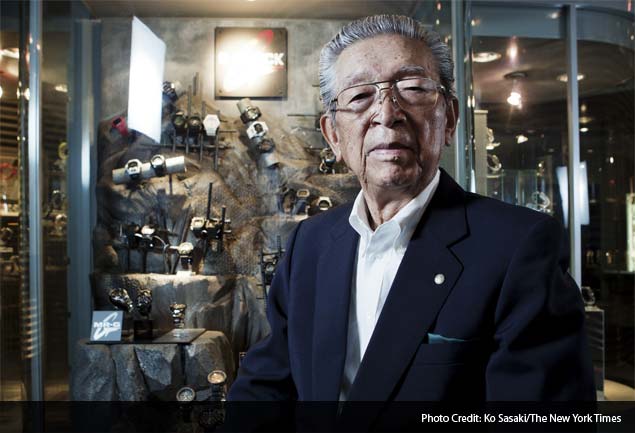 The geeky-watch niche is drawing interest from some of the biggest names in technology. Apple trademarked "iWatch" in several countries this year, which has fueled speculation that it is working on a wristwatch that would link with a smartphone. Samsung Electronics is expected to unveil a watch in early September that can make phone calls, play video games and send emails.

Last month, Sony revamped its Smartwatch, which communicates with smartphones and lets users play games or check Facebook by tapping their wrists. And a flurry of startups, like Pebble, are coming out with timepieces that claim to redefine what goes on the wrist.

The spike in interest in wearable computing devices is shaking up the digital watch industry, catapulting a sleepy business to the cutting edge of personal technology. In the process, established digital watchmakers like Casio are finding that they must contend with new competitors.

But that is nothing new for Casio, a company with $3.06 billion in annual revenue that also makes compact cameras, musical instruments and calculators. For instance, the introduction of the smartphone, which has a better camera in every iteration, has knocked the makers of compact cameras for a loop.

Minolta exited cameras in 2006, selling its camera technology to Sony. This year, Olympus and Fujifilm each said they would drop lower-end models after plunging sales. Even heavyweights like Canon and Nikon have seen sales fall in their point-and-shoot models.

Shipments of digital cameras fell 43 percent in the first half of 2013 from a year earlier, according to the Camera and Imaging Products Association.

Casio has taken a beating, too. Last year, it broke even, but analysts say its focus on lower-end, thin cameras means it will continue to lose market share. This makes the company's watch business even more important.

Sales in digital watches account for 85 percent of Casio's operating profit of approximately $206 million. But in a report earlier this year, analysts for Credit Suisse said the advantage would increasingly tilt toward companies that focus on connectivity, apps and user interfaces.

Moreover, the emerging role of the smartphone as a hub that keeps gadgets like smartwatches connected gives a distinct advantage to Apple and Google, which dominate the smartphone universe, those analysts said.

"Wearables are rapidly evolving from single-function, hard-to-connect, dumb devices to what we believe will increasingly become multifunction, always-connected, smart/aware devices," they said.

The market for such technology - including smartwatches, fitness monitors, shoes and headsets - could jump tenfold to as much as $50 billion in the next two to three years, the report said.

An advanced digital watch that acts more like a computer is not a novel idea. The fictional British spy James Bond sported watches that were at times fitted with a scrolling LED ticker, a homing device, a microphone, a video monitor and a tiny printer for secret messages from London, not to mention lasers, Geiger counters and grappling hooks.

But in real life, success in smartwatch design has been more elusive.

Citizen, Casio and other Japanese manufacturers developed calculator watches in the late 1970s, but they never took off. Casio soon emerged as a leading digital watchmaker, adding dictionaries, blood pressure sensors, a touch screen and gesture control by the late 1980s.

But after disappointing sales of many of those models - Kashio said the company was ahead of its time - Casio instead turned its attention to making the weatherproof, shatterproof G-Shock watches. The G-Shock has since won a following thanks to its retro look, low price, durability and technophile cachet.

Other watchmakers also struggled. Fossil has worked with Sony Ericsson, Microsoft and Palm to develop high-tech watches, including a 2005 personal organizer watch that came with a tiny stylus.

In 2004, Microsoft introduced the Spot watch, which would display news, weather and stock quotes via radio waves. Swatch teamed with Microsoft on the Paparazzi. Both companies have since discontinued those efforts with little to show for them.

"Until now, smartwatches haven't quite been able to find their raison detre," said Kuninori So, vice president of the Tokyo-based technology consultancy, ROA Holdings. "If Apple comes out with a revolutionary smartwatch with a beautifully easy to use interface, that could change."

Casio continues to aggressively market new products. Last year, it introduced a watch that uses Bluetooth to let wearers see incoming calls and messages. And it is working on a host of models, including one that will let joggers post details of their runs online, Kashio said.

Casio contends that it has an advantage because wearable devices like watches, which might accidentally be slammed into a wall or dunked into water, require far more ruggedness and durability than tech companies are used to. Casio executives say another advantage is the longer battery life of its watches. Casio says its watches will run for two years on a single lithium coin battery; rival models need recharging every few days. Experts agree that battery life could be important because users are not used to charging watches frequently.

"Casio has done a pretty good job in anticipating the market," said Serkan Toto, an independent Tokyo-based technology analyst. "But if Apple or Samsung come into this market with better functionality, better design and a better operating system, that would be trouble."

Casio is no pushover. Founded by the four Kashio brothers in the ashes of World War II, it is a rare consumer electronics company with roots in computing that has stayed above the wave of commoditization that swamped so many of its peers.

Its profit margins of close to 20 percent on its G-shock, Baby-G and other rugged digital watches are the envy of the electronics industry here.

More recently, a weaker yen has been a tail wind for the company. Analysts at Morgan Stanley MUFG expect net profit at Casio to jump almost 30 percent this year to 16.9 billion yen, thanks to brisk G-Shock sales.

The founding brothers - the surviving two of whom still lead the company - are themselves the stuff of Japanese management lore. The eldest, Toshio, was the family's management guru; the second-eldest, Tadao, was behind many of the early inventions, including the first all-electric calculator. The third brother, Kazuo, is the outgoing salesman, and Yukio, the baby of the family and a trained engineer, is in charge of production.

In an interview, Yukio Kashio pointed out that the company has won product wars before. In the 1960s and 1970s, about 40 companies in Japan jostled for dominance in what is remembered here as the "calculator wars." But Casio muscled all but archrival Sharp out of the market.

"Those were simpler times," Kashio said. "Still, I don't think anyone is as passionate about counting numbers, or time, as we are."