HTC might be planning to give Android Auto some competition through the as-yet-unannounced HTC Cello, an in-dash car infotainment system, details of which surfaced on the Web over the weekend.

According to a Reddit user, who has posted what looks like a HTC release note, the HTC Cello will feature more functions than what most in-dash car infotainment systems based on Android Auto currently offer. The device is for now being tested for night vision, sonar, Mini HMI (Human Machine Interface), DVD, tyre pressure monitoring system, lane departure warning system, navigation and GPS. 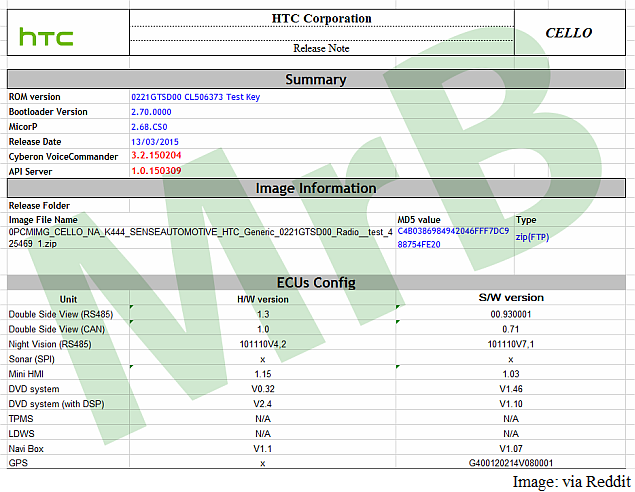 Further, the HTC Cello is tipped to run Android 4.4 KitKat, which might be upgraded to Android 5.0 Lollipop by the time it hits markets. HTC Cello will apparently be running a version of HTC Sense especially made for vehicles called Sense Automotive. However, the user adds that there are many issues yet to be solved in Cello. The release date and price of the infotainment system have not been tipped.

HTC has been lately venturing in different areas like fitness trackers and VR headsets. The firm this year during MWC announced its first virtual reality (VR) headset, the HTC Vive, built in collaboration with Valve. It also unveiled its first fitness tracker, the HTC Grip. The smartband is powered by UA Record, a health and fitness network from Under Armour designed for athletes and fitness enthusiasts.