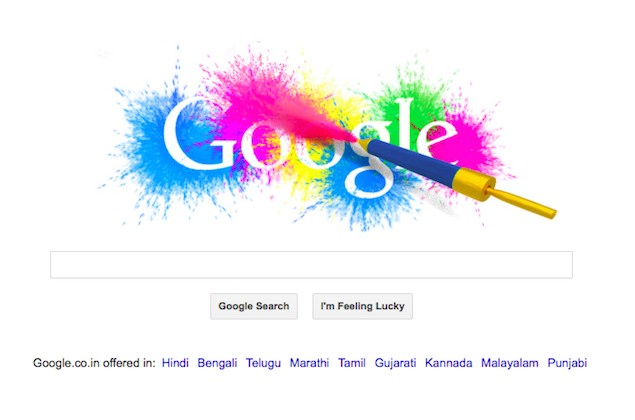 Holi - the Indian festival of colours - has inspired Google to post a colourful doodle on its homepage in the country.

Visitors to the Google India homepage will see the search giant's tribute to Holi in the form of a pichkari (water gun) splashing colour all over the Google logo. Gulal (colour) of four different shades - blue, pink, yellow, and green - can be seen in the logo.

Holi is celebrated at the approach of vernal equinox (equal days and night), on the full moon day in the Hindu month of Phalguna. This year, the festival of course falls on Monday, March 17, while it will be celebrated in 2015 on Friday, March 6 - another long weekend for the lucky to enjoy.

Holi marks the end of winter, and signals the arrival of spring. Legend has it that Lord Krishna first played holi with Radha and other gopis :

In his youth, Krishna despairs whether fair skinned Radha and other Gopikas (girls) will like him because of his skin colour. His mother, tired of the desperation, asks him to approach Radha and colour her face in any colour he wanted. This he does, and Radha and Krishna became a couple. The playful colouring of the face of Radha has henceforth been commemorated as Holi.

On the eve of the festival a bonfire is lit, signifying the victory of good over evil, an activity called holika dahan. On the day of Holi (also called Dulhendi) people smear others' face with colours, spray coloured water, and exchange pleasantries over food and drinks.

Holi is primarily celebrataed in India, Nepal, and other regions of the world with significant populations of Hindus or people of Indian origin.