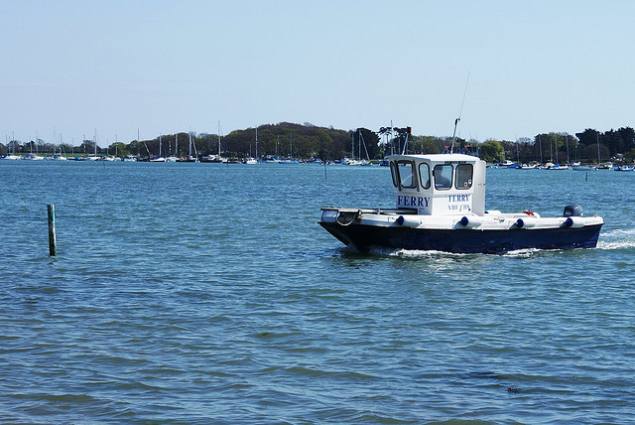 How's this for an employee perk? Google workers commuting from San Francisco to the company's Silicon Valley campus can now make part of the trek on an 83-foot, Wi-Fi-equipped catamaran.

The search engine company has launched a free ferry service from San Francisco's ferry terminal to the Port of Redwood City about 26 miles away, where employees can then hop on a private bus to work.

Named the "Triumphant," the charter ferry can carry up to 150 passengers and runs twice each morning and evening, with voyages lasting about 47 minutes each way, according to KPIX-TV.

"They're going to see if this is something their employees want, and if it makes economic and logistical sense," said Peter Dailey, maritime director for the Port of San Francisco, which operates the terminal used by the Google ferry and other charter services, told the San Jose Mercury News.

None of Google Inc.'s competitors has announced similar ferry plans.

Google will reportedly pay about $50 each time it docks its ferry in San Francisco. The company's venture into aquatic commuting depends on the impact on public ferry operation.

"We certainly don't want to cause any inconvenience to San Francisco residents and we're trying alternative ways to get Googlers to work," a Google representative said in a statement Wednesday.

Google is hoping to defuse a growing controversy as the boat service started on the same day San Francisco city officials said Google and other tech companies, including Apple Inc. and Genentech Inc., that use public bus stops to pick up thousands of employees on private shuttles must pay roughly $1 per stop per day as part of an 18-month pilot program.

Critics of Google's buses are not thrilled by news of the boat, citing concerns that catamarans are worse for the environment than shuttle buses.

"I have nothing against tech workers," Sarah Sherburn-Zimmer, an organizer for the Housing Rights Committee who has been instrumental in the protests against Google's buses, told the San Francisco Chronicle. "There's nothing environmentally friendly about moving a workforce huge distances. It doesn't matter how you do it."