Share on Facebook Tweet Snapchat Share Reddit Email Comment
Google has been doodling throughout the World Cup 2014 tournament, with doodles about teams, the culture of Brazil, footballing skills and other aspects showcasing a slice of the South-American nation to the world. And it is little surprise that the latest doodle on Saturday from Google is about the Argentina vs Belgium quarter-final match. On Friday, Google had doodled the rivalries between Germany and France prior to their match.

While the Germany vs France doodle was all about stoking age-old rivalries between the two European footballing giants, Saturday's Argentina vs Belgium match doodle is about celebrating football. The six letters of the word are seen enjoying the carnival. The first 'G' is playing a tuba, while the second one is beating on a drum. The 'E' too is depicted as playing a drum strung around its waist. One of the 'O's' is blowing onto, what appears to be, a tooter. The other one too is blowing on a similar contraption whilst waving a flag. The 'L' however appears least interested and is sitting on a seat reading a book on football. The green and canary yellow ball is also there in the doodle as the picture on the cover of the book that the 'L' is reading.

Clicking on Saturday's World Cup 2014 doodle one is taken to the search results of the Argentina vs Belgium match. It will be played at the Estadio Nacional de Brasillia, in Brasillia. Both the teams have come into the quarter-finals steam-rolling oppositions. Belgium, also called the 'Red Devils', have surprised one and all with their attacking style and will remain a threat that the Argentinians look to neutralise. 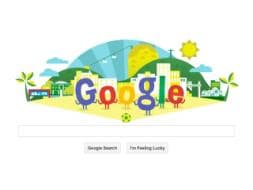