When was the first parachute jump? Google doodle marks the historic event 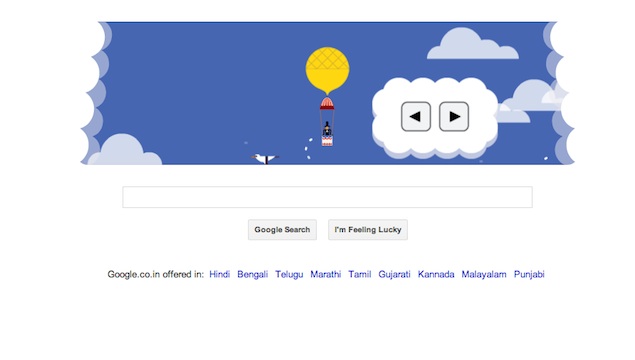 The 216th anniversary of the world's first parachute jump is the inspiration behind Tuesday's interactive Google Doodle.

The first ever parachute jump was made by Andre-Jacques Garnerin, a French balloonist and the inventor of the frameless parachute, on 22 October 1797.

Today's interactive Google doodle depicts a parachutist going up in the air with the help of a balloon and making a descent as he runs into clouds and flying birds. One can even change the direction of the parachute by pressing the left and right keyboard buttons, as the parachutist lands.

Garnerin made the first descent on 22 October 1797 at Parc Monceau, Paris, with a silk parachute that was shaped like an umbrella, approximately seven metres in diameter. It resembled a closed umbrella with a pole running across its centre and a rope running via a tube in the same pole, connecting it to a balloon.

He sat in a basket tied with the parachute and after reaching a height of nearly 3000 feet or 1000 metres, untied the rope that connected the balloon and the parachute to make the descent. Garnerin was successful in landing uninjured and was given the title of Official Aeronaut of France.

Garnerin was a student of the ballooning pioneer, professor Jacques Charles, and worked with his brother Jean-Baptiste-Olivier Garnerin. He was involved with the flight of hot air balloons, and

Garnerin, along with his wife Jeanne Genevieve, who was also his student, made a number of demonstration flights.

Garnerin died in Paris on 18 August, 1823 in a construction site accident when he was hit by a beam while making a balloon.