Gone in 80 seconds: When Bill Gates took on Magnus Carlsen in chess 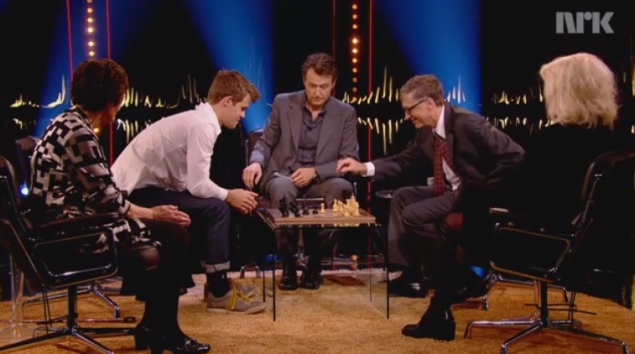 Challenged to a game in a chat show hosted by well-known Norwegian television presenter Fredrik Skavlan and due to be shown in Norway, Denmark and Sweden, Microsoft founder Gates said before the game that the challenge had "a predetermined outcome".

Gates, 58, who was ranked by Forbes magazine this year as the world's second-richest person behind Mexico's Carlos Slim, had 2 minutes to make his moves against just 30 seconds for Carlsen. He lost to the 23-year-old in around 1 minute 20 seconds.

"Wow, that was fast," he said to Carlsen, whose rockstar appeal has won him the moniker, the "Justin Bieber of chess".

The programme, clips of which Reuters received in advance, was recorded on Wednesday in London, Norwegian TV NRK said.

Asked by Skavlan under what circumstances he felt intellectually inadequate, Gates answered: "When I play chess with him (Carlsen)".

Carlsen, a grandmaster since he was 13, received non-stop television coverage in Norway when he beat defending champion Viswanathan Anand of India last November to take his first world title.