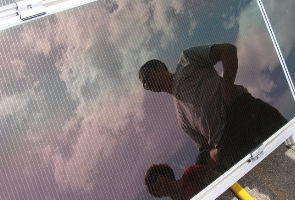 Highlights
In a move that could shake up the American solar industry, General Electric plans to announce on Thursday that it will build the nation's largest photovoltaic panel factory, with the goal of becoming a major player in the market.

"For the past five years, we've been investing extremely heavily in solar," said Victor Abate, vice president for G.E.'s renewable energy business. "Going to scale is the next move."

The plant, whose location has not been determined, will employ 400 workers and create 600 related jobs, according to G.E. The factory would annually produce solar panels that would generate 400 megawatts of energy, the company said, and would begin manufacturing thin-film photovoltaic panels made of a material called cadmium telluride in 2013. While less efficient than conventional solar panels, thin-film photovoltaic can be produced at a lower cost and have proven attractive to developers and utilities building large-scale power plants.

G.E. has signed agreements to supply solar panels to generate 100 megawatts of electric power to customers, including a deal for panels generating 60 megawatts with NextEra Energy Resources.

G.E., a manufacturing giant, operates in a range of energy businesses, from nuclear power plants to natural gas turbines. It has been aggressively expanding its energy portfolio, particularly through acquisitions.

Mr. Abate said G.E. had completed its purchase of PrimeStar Solar, the Arvada, Colo., company that made the thin-film photovoltaic panels. G.E. said the Energy Department's National Renewable Energy Laboratory recently certified that a PrimeStar solar panels manufactured at its factory in Colorado had set a 12.8 percent efficiency record for cadmium telluride technology. Conventional solar panels typically are 16 to 20 percent efficient at converting sunlight into electricity.

"We believe we'll be a cost leader, a technology leader and we're excited about our position in a 75-gigawatt solar market over next five years," said Mr. Abate.

The global conglomerate's entry into the highly competitive photovoltaic market is likely to prove a significant challenge to First Solar, the thin-film market leader and the dominant manufacturer of cadmium telluride panels.

Also at risk are start-ups like Abound Solar, a Colorado company that in December obtained a $400 million federal loan guarantee to build factories to manufacture cadmium telluride panels.

G.E.'s initial panel manufacturing capacity will be a fraction of the more than 2,300 megawatts of capacity that First Solar, based in Tempe, Ariz., plans to have online by the end of 2011.

But Mr. Abate said that G.E.'s solar effort would parallel the rise of its wind energy business.

But as with its wind business, G.E. will face competition from low-cost, government-subsidized Chinese manufacturers.

The United States government has offered a range of subsidies to help American solar panel makers, including loan guarantees for new factories. G.E. said it was not applying for a loan guarantee but was exploring applying for state and federal manufacturing tax credits.

Prices for conventional silicon-based solar modules have plummeted 50 percent in recent years and are expected to continue to fall, in large part because of the rapid expansion of Chinese manufacturing capacity. That has put particular pressure on thin-film companies to increase the efficiency of their panels and maintain a technological edge.

Mr. Abate said G.E. would focus on improving the 12.8 percent efficiency of its panels as well as lowering costs.

"We see our way to much higher efficiencies than that," he said. "We probably can cut costs 50 percent over the next several years."
Comments