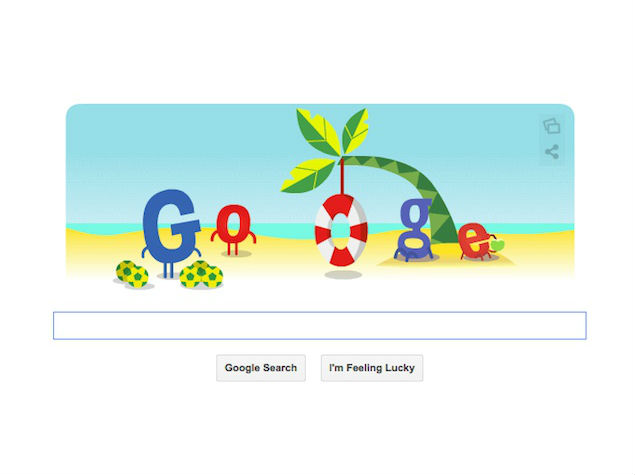 Google's football focus continues into its latest World Cup 2014 doodle, this time for the France vs Nigeria match on Monday, which features another skill that is frequently seen in high intensity matches the likes of which are being played at the World Cup Round of 16. The doodle this time features the long distance volleys which make for lethal scoring styles at least as far as strikers are concerned.

The France vs Nigeria doodle on Monday features the six letters playing football on the golden beaches in Brazil. Sans the second 'O' which is a life float strung on the 'L', which is in the shape of a palm tree, all the other letters are stick figures. The 'E' is shown sipping away on a drink in a coconut resting in the shade of the palm. The second 'G' and the first 'O' are seated on the sands, while the first 'G' is kicking footballs through the life float 'O' with alarming speed and accuracy. The green and gold football makes a return of sorts as the official ball of the World Cup 2014 doodle range.

Clicking on the Google doodle users can see the search results for the upcoming France vs Nigeria match. The page also displays the results, the news from the teams, players and the World Cup along with the schedule of the upcoming matches. Till now, Brazil, Columbia, Netherlands and Costa Rica have made it to the quarter-finals. The World Cup 2014 doodle number 42 is visible in most parts of the world save for East, West and North Africa, and the whole of Russia.

The France vs Nigeria match will be played on Monday at the Estadio Nacional de Brasilia, Brasilia. In the matches played on Sunday at the World Cup 2014, the Costa Rica vs Greece encounter went to a penalty shootout after the match ended with scores 1-1 after regular and extra time, and Costa Rica eventually prevailed. The big match of Sunday evening was the encounter between The Netherlands and Mexico. Played at the Estadio Castelao in Fortaleza, the match saw the Mexicans dominate through most of the first and second half with the Mexican keeper Guillermo Ochoa making stunning saves off both Arjen Robben and Klass Jan Huntelaar (who came in as a replacement for the ineffective Robin Van Persie).

In the 48th minute in Sunday's match, Mexico took the lead through Giovani Dos Santos and it was not until the 88th minute where Netherlands broke the frustrating deadlock through a fine timed pile driver volley from Wesley Sneijder. In the 94th minute of injury time Arjen Robben won a penalty for a tackle inside the box near the Mexican goal line, which was converted by substitute Klass Jan Huntelaar to give the Dutch the lead and the World Cup Round of 16 win through to the quarter-finals. It was also Huntelaar's first match this World Cup. The France vs Nigeria match kicks off at 9:30pm IST.